Okay so the past 24 hours or so have been some of the craziest in Hornet franchise history. But, looking at what lies ahead we need to sort out the cap issues that we face or we will be in a little bit of trouble.

I love Tyson Chandler and I am glad that he is back because I don't believe he should have been traded. Now from what I have heard no one is biting at Peja but I think the closer you come to the deadline the more teams start to get desperate to make move so here are some thoughts of trades we might do. 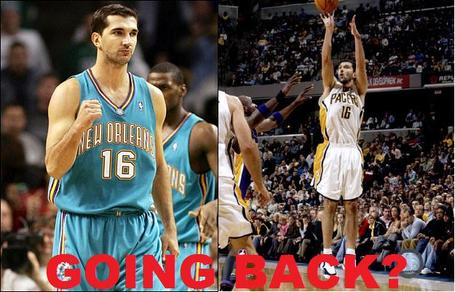 Before I outline these trades just as a side note I think it may be to late to organise any of these trades before the deadline but just to throw them out there.

Now I dont know if this would work out but if this whole thing is all about money then why not do this. I don't know if LaFrentz would bring much to the team or not, but what I do know is that his contract runs out at the end of this year. This may come back to haunt us as the Blazers are a pretty good team, so I don't know if I would be willing to pull this off. But again if its all about money...

Peja Stojakovic to Indiana for Rasho Nesterovic and Maceo Baston:

Wouldn't this be odd, we trade Peja back to where we got him from. The Pacers might be willing to make this deal, but again I can only throw things out there. Is Peja worth two players? Are these two players integral parts of the Pacers plans? I don't know, but what I do know is that if this happens it would work out nicely for us.

Peja Stojakovic and Hilton Armstrong to Lakers for Lamar Odom:

I don't think this is likely to happen at all, because it's probably to late to do this. Not only this but I think the Lakers want expiring contracts. This was something nice to throw out there but if this happened, HA, I would be loving Jeff Bower.

Look I love Mo Pete but I don't think Byron Scott is on a similar wave length. Okay so Pete has been injured, but even when he's not Byron is not that willing to put Mo in there. Now I am not saying I like Swift, but again if this is all about the money then it might make good sense to do this.