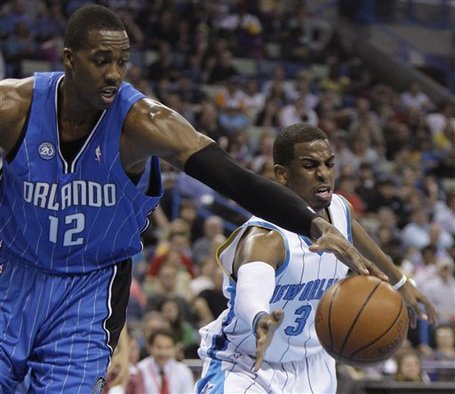 Holy awesome point guards! Did anybody see that win coming? Even if, for some insane reason, you actually believed we stood a chance against Dwight "47/19/8" Howard with no one to guard him in the paint, there's no way you'd have predicted we'd outscore them in the paint 44 to 18 or that we'd win by more than 20 points, right?

Chris was a monster tonight. He dropped 36 points, 10 assists, 6 rebounds, 3 steals, and 1 turnover in... are you ready for this... 33 minutes of playing time. Crazy, right? He started the game by dropping his first six shots and, by the time four and a half minutes ticked off the clock, he had 12 of our first 17 points. Amazing.

Five other guys added double-digit point totals (but none had more than 15), but the real credit for this victory goes to the Hornets' interior defense. I'll say it again, since it bears repeating. Our interior defense was a major factor in our win tonight. The Magic ran a weak-side iso to Howard for most of the first half (which any coach with sense would have tried), but Hilton and Kiwi stepped up to the challenge in a major way. Both got owned a few times (it just happens when you have the unpleasant assignment of guarding Howard), but they also held Dwight to a very human 12 points, 8 boards which, in case anyone is interested, is exactly one point better than Melvin Ely's performance tonight. Granted, they were never really on the court at the same time, but still... Dwight barely outperformed Melvin Ely. Crazy.

As awesome as this performance was, I don't think it completely erases the memory of the walloping this team gave us for Christmas (which, like tonight's game, was also on national television). Regardless, it was a solid step towards the larger goal of regaining the ground (and confidence) we lost leading into the All-Star break.

Let's hope we can carry some of this energy over to Friday's game against the Lakers.