I think the immediate reaction to this trade has been: the Hornets give up on 2009 and build towards 2010 and 2011. In my opinion, both the former and the latter are very overstated.

You simply don't trade away the second best defensive center in the conference, and expect to defeat Pau Gasol, Tim Duncan, Yao Ming, Dirk Nowitzki, Amar'e Stoudemire, or Nene Hilario. But Tyson Chandler hasn't played a minute till January. The Times-Pic alluded to the severity of his injury being much worse than initially assumed. The Hornets definitely became a lot worse on defense... but I think the Hornets will finish up the season a lot better than people realize, and will make much less noise in the upcoming offseasons than expected.

Chris Wilcox, Joe Smith, and Devon Hardin are coming over. Wilcox has a nice individual offensive game, Joe Smith has posted around a 15 PER for 14 straight seasons, and Hardin was a guy I enjoyed watching at California. But George Shinn will be highly tempted to let these guys walk in the offseason

For one, Wilcox has a near 7 million dollar deal which expires in the summer and Joe Smith has a 5 million expiring deal. That's 12 million dollars saved in one fell swoop. I know George Shinn's a multi-millionare and all, but that's still a tidy sum. Hardin was the 50th overall pick last year, and I highly doubt he even shows up to New Orleans, due to roster restrictions.

The Pick and Roll and Offense

This is something I still have faith in. I've followed Chris Wilcox' career since his college days, and the guy runs the pick and roll beautifully. He sets very strong screens, and he can throw down really well. We lose some serious offensive rebounding with Chandler gone, but Joe Smith is a good bit better than Hilton on the glass. Put aside your memories of Tyson throwing down monster oops for a second... and I think there's a strong case that the starters' offense has just gotten better.

The bench's offense too. Smith runs the pick and pop instead of the pick and roll, and he's got a reliable midrange game. That should give the bench a play to run in lieu of Devin Brown charging wildly at the hoop. The Daniels/Smith pick and pop... mmm, the bench actually running plays. How exciting.

Overall, it's hard to say the offense won't get better. The question will be whether it can offset the defensive losses. My feeling is no, but it won't be nearly as bad as it seems.

In essence, we just took 37 million dollars off the books- 11.35 million for this upcoming summer. But for those of you dreaming up big free agent signings, I hate to break it, but ain't happening (this summer at least).

Right now, New Orleans is in what I call salary purgatory- right in between the luxury tax and the salary cap level. The 2009-2010 salary cap figures to be set right at 60 million dollars. There's been a lot of talk that the 2009-2010 luxury tax will be lowered into the 69 million dollar range next year (thus emptying the wallets of many NBA owners). The loss of Chandler puts us at a projected 66 million going into 2009-2010... and that's without Wilcox or Joe Smith.

We have the false illusion of "cap space" since we're ostensibly under the luxury tax. But since we're over the salary cap, we can't sign any new free agents unless they're our own (Wilcox, Smith) or unless they agree to one of the exceptions (which no "good" free agent is going to do in a million years).

The Part Where I Scribble Illegibly in Microsoft Paint 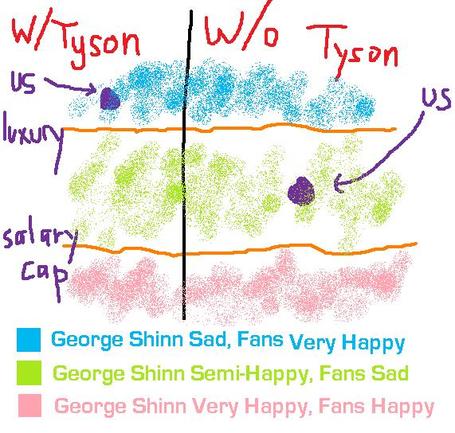 Any "give up on the season" trade should've ideally dumped us into the pink. This one did not.

I know a lot of you probably came here, expecting some sort of silver lining, however small. There isn't one.

As illustrated so professionally above, we have no real shot of signing a great free agent this summer. Our best bet will probably end up being a re-sign of Chris Wilcox. We don't have the cap space, our owner doesn't have the money. James Posey will be a year older. We won't even have a great draft pick, because inexplicably, we couldn't pry away a single one of OKC's five first rounders over the next two years. Five! And we couldn't get a single one... not even a 2010 pick.

Unless Jeff Bower has another trade up his sleeve, this is the team we'll be rooting for next season (well, assuming you're still rooting for the Hornets). We have 53,000,000 already commited for the summer of 2010. That gives us about 20 million to play with to sign a center, a backup shooting guard, a backup point guard, and some backup bigs. A guy like Chris Bosh would command 20 million all by himself.... yeah, I'm not liking the odds.

James Posey. I hate to say it, but it is what it is. The front office, the fans, everybody (me included) underestimated the gap between the Hornets and the Celtics/Lakers.

Leave injuries be for a second. The economy was the straw that broke the camel's back, but leave that aside as well.

Ultimately, we never were a James Posey away from being a title contender.

The Best and the Worst

Chris Paul turns Chris Wilcox into an 18 PER type talent. Not totally unfeasible... if you look at the last time Wilcox was on a halfway decent team (Seattle, 2005-2007) he posted a 20.5 PER over his first 30 games, and a nearly 17 PER over the next 82. And that was with Luke Ridnour running the point.

In return, Wilcox decides to play some defense.

Wilcox's role in the offense helps DX return to last year's levels. It's conceivable that we still push the Spurs for the top spot in the Southwest. It's questionable how we fare in the playoffs, but it's not like we're going to fade into obscurity immediately.

Joe Smith and AD become really good at running the pick and pop, and the bench can actually play something resembling offense.

Right before the impending NBA Finals between CLE and LAL, Joe Smith teaches all the Cavaliers' plays to Jeff Bower. Bower then sells the playbook to LA GM Mitch Kupchak for the rights to Pau Gasol.

Chris Wilcox and Joe Smith are terrible. Both leave in the offseason, Chris Paul gets traded to the Knicks for the rights to Banilo Galligari and Androa Gargnani, and David West retires from the NBA to join Jim Rome as a studio analyst. James Posey recruits Ryan Bowen and Sean Marks to form a travelling troupe of singing bards and George Shinn moves the Hornets to New Zealand, citing lax taxation laws.