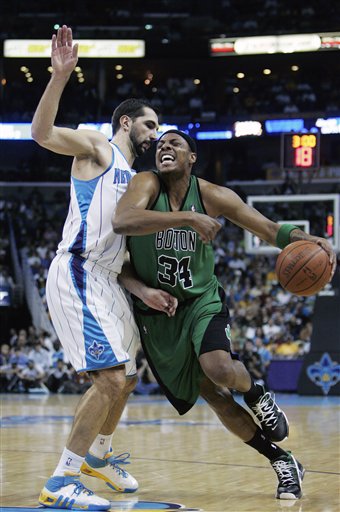 The Hornets fought a close battle for 36 minutes with the reigning champs tonight. At the end of three, the Hornets found themselves tied 64-64 and keeping pace with the Celtics in the paint and on the boards. But iit took only four and a half minutes and a 15-3 run by the C's at the beginning of the fourth to put the game out of reach and spoil CP's return to the hardwood.

That fourth quarter was just terrible. We were giving open looks to anyone who came knocking. We got sloppy on D, gave up position on easy rebounds, and went ice cold from the field (we only notched 13 points in the final 12 minutes).

Peja and DX (our two primary scorers) went a combined 6 for 24 from the field, with Peja adding a 1 for 6 performance from deep. Sadly, a lot of those shots were pretty open, especially a handful of open looks to Peja in the fourth (that could have closed the gap).

Other than our shots drawing iron (or air), here are some other totals you may be interested in (all numbers reflect stats before Byron pulled our starters):

Boston didn't have a great night tonight (except for Pierce, who was mostly unstoppable), so it's a bit of a shame that we couldn't capitalize. Let's just hope we can get it together over the break. We've got a long uphill battle before we can regain solid ground in the playoff race.