The State of the New Orleans Hornets

Share All sharing options for: The State of the New Orleans Hornets

50 games are in the books. In many ways, these aren't the 50 games we wanted to play. This isn't what we envisioned, when we fell, defeated at the hands of the Spurs. Nor is it what we hoped for when we spent the big bucks in the offseason. The players we wanted in suits weren't always the ones who ended up in suits. The teams we crushed last year weren't nearly as unfortunate this year. The bandwagon fans and media members we acquired last April have fallen by the way side, one by one, week by week. After all, there are bigger and better things out there: guys throwing chalk, guys wearing capes, guys pretending to fire imaginary guns after made shots. These may not have been the 50 games we wanted to play, but fact is, these are the 50 games we ended up playing.

And because of it, everyone seems to have figured out the Hornets. Oh, they're a creative shooting guard away from ever contending. Oh, they're relying too much on one player. They shouldn't have let Jannero Pargo walk. That James Posey signing is coming back to haunt them already, they should trade him while he's still got some value. Hahaha, David West, All Star?

In actuality, the reasons for our struggles aren't nearly as damning as has been suggested. Essentially, it all boils down to two things. The first is obvious: injury. Tyson missing 18, West missing 7, and Paul missing 5 are big. The effects have been visible on offense and defense; what was once a dominant offense has steadily regressed towards the league average. What was once a solid defense has served as a 48 minute layup drill in recent days.

So yes, injuries have hurt this team. The best we can do is hope for a full recovery of health. It may or may not happen. Regardless, there's a non-health related component of our struggles. Even when those guys have been on the floor, the team hasn't been playing "contender" basketball.

The Disparity Between the "Paper" and Reality

The mythical "paper" has become an oft mentioned concept across sports. Team X should be good on paper, but they've just struggled to do it on the field. Team Y should struggle according to the paper, but the whole seems to be more than the sum of the parts. If anything, the Hornets have erred to the side of Team X more than Team Y. What can we chalk the discrepancy up to?

Well, first of all, how good does the paper say we should be? For starters, we have either the best (David Berri) or second best (John Hollinger) player in the NBA right now. That's a start. At PF we have, at the very worst, a definition of the fringe All-Star. We have possibly the best defensive center not in possession of property near Disney World or the Alamo. We have a top notch three point shooter. We have a horrible bench. And we have James Posey.

Sum it all up, and the paper, and preseason projections based on said paper, contend that this should be one of the top two teams out West.

Is this simply the classic case of the whole being the sum of the parts and nothing more? Maybe... but there's a key difference between this New Orleans squad and other teams that were good on paper but never made it in real life: this team's lived up to its paper billing before. Last year's Hornets team proved that the Paul/West/Peja/Chandler combination was a capable one. The offseason saw us do little to the core, adding Posey for Bonzi, and eventually Antonio Daniels for Jannero.

We really haven't fallen short at a "team" level. There isn't some random, nebulous element missing from this team that so many announcers seem to love referencing. It's not a case of this team leaving its "swagger" in 2008. Rather, there have been a variety of short-comings at the individual level.

The Glitches and the Fixes

Issue #1: Tyson Chandler simply hasn't been Tyson Chandler. Even when healthy- if we can presume that's been the case at all this season- his defensive rebounding has plummetted. He's committing too many fouls. He isn't finishing at the hoop.

Remedy: Patience. This is one that we have no choice but to wait out. Chandler's decline in numbers can be attributed to his lack of health or statistical aberration, and most likely a combination of the two. He's 26 years old, in the prime of his career, coming off two seasons in New Orleans where he ranked first and fourth in total rebounding rate.

Likelihood that said remedy comes to fruition: Very likely. CST videos indicate that his recovery is coming along nicely; it's called statistical "aberration" for a reason.

Issue #2: This one is rapidly turning into a non-issue, but is probably worth bringing up for now. David West's numbers have been ever so slightly off, best captured by PER. Specifically, his jumper % is down from 43% to 40%, and his offensive and defensive rebound rates are both down by around 2 percent.

Remedy: A renewed focus on the boards. We've already seen this starting to happen a little bit in the last week. It will be interesting to see if he can keep it up, coming off the All-Star break and with the return of Tyson to work the boards with him.

Likelihood: Not too likely that his PER will recover to last year's levels, since we're already 50 games in.

Issue #3: The bench. As far as rebounds go, Sean Marks and Hilton Armstrong have been mediocre and pathetic, respectively. It doesn't matter how well J. Posey or the rest of the bench D up if there's nobody behind to clean the glass. Overall, I don't much buy the bench's recent "resurgence." We've played Memphis, Minnesota, Toronto, Chicago, Golden State as 5 of our last 7 opponents.

Remedy: A trade or D-League acquisition. There are some quality rebounders in the Developmental League at the moment, some of whom probably warrant a flyer. It's highly, highly unlikely that Marks or Armstrong suddenly turn their seasons around and become adequate on the boards. As far as remedying the bench's scoring issues, that will be a much stiffer challenge.

Likelihood: Not very likely. The Hornets already signed Anthony Tolliver over some much better rebounding options, on the grounds that "he played for the Spurs." And they refused to play him a minute over a 10 day stretch that included injuries to both Tyson and Hilton. I don't have much confidence in the organization's ability to dip into the D-League talent pool. Trade-wise, it seems unlikely we could acquire another bench piece, especially scoring wise. Bower's done a good job in the past, but the value of our limited trade assets is questionable.

You knew I couldn't go numbers-free for an entire story, right? What follows is my attempt to quantify the above issues into palpable figures. The underlying question is: how many losses (conversely, "lost" wins) can we attribute to injury, and how many can we attribute to the instances of individual player regression described above?

It seems a difficult question at first, but it can be simplified by looking at the number of possessions lost by starters to their backups, both offensively and defensively. 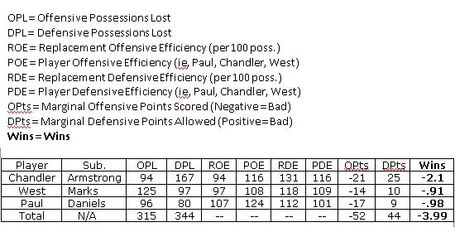 As you can see, I've included only Paul/West/Chandler for the purposes of this exercise. And obviously, the replacements aren't always exact- Hilton didn't get all of Tyson's minutes, nor did Marks get all of West's, etc. But it's a fair approximation. Between them, Marks and Armstrong received a heavy share of those lost minutes. Possessions figures and defensive efficiencies are calculated via raw numbers from Basketball Value and Basketball Prospectus. Offensive efficiencies from Basketball Reference. Defensive efficiencies are estimates based on data, but look like they match up pretty well observationally. Wins derived from Dean Oliver's Basketball on Paper Pythagorean formula.

Phew. Now that the disclaimers are out of the way... what does this table actually mean? It's an approximation of how the Hornets would have done if those three guys hadn't missed time. Specifically, it extrapolates on the way those guys have played this year. Extend Tyson's poor performance in 32 games (relative to last year), West's slightly off performance (again relative), and this is what you get.

According to me, the net loss is around 4 wins. Given good health and zero improvement in actual player play, the Hornets would've finished 34-16 heading into the break.

Now that doesn't sound that impressive at first. But look at the standings. A 34-16 would put us in a virtual tie with San Antonio for 2nd in the West, and 6 behind L.A. in the loss column.

Everyone's hyping up San Antonio right now. The only "legit" contender to L.A. in the West. I think a couple guys picked them to go all the way in ABC's latest broadcast. The numbers indicate that barring injury, we're right there with them, even with Tyson Chandler and David West underperforming.

I can't stress that enough. It's statistically highly likely that Tyson/David rebound in the last 32 games. If they don't recover, if we don't make a trade before the deadline, if we don't acquire a single new big, if JuJu remains glued to the bench, if we still must scream at Byron every other night, if Mo-Pete never emerges from the dog house again, we're still neck and neck with the Spurs.

If any of those things do happen? It's us and the Lakers.

For 50 games, New Orleans has been embroiled in a state of flux, way more flux than they're given credit for. The signs all point to a potentially strong finish to the season. And yet, that means nothing. At the end of the day, the Hornets still have to go out and do it. Nobody's going to go, "oh, you're supposed to be good, here, have this win."

Any way you slice it, these final three months will not be easy. Our schedule is heavily, heavily backloaded with a variety of back-to-backs on the horizon. We still face in-division opponents 8 more times- once every 4 games- and of those, only one meeting remains with Memphis.

Good teams play through adversity, you say. No, good teams are based upon stability; good teams regain stability quickly after staying afloat through adversity. For now, we've gotten through the adversity and injuries. Whether the Hornets can land on their feet come Tuesday in OKC will be the question. If they can hit the ground running, these final 32 games could be 2008 all over again. And maybe more