For all the talent and skill that was missing on both teams tonight, the game came down to the one skill that can't be taught: height. Marc "The Grizzlier" Gasol and Darko "The Serbian Gangster" Milicic had it; Ryan Bowen and Sean Marks did not. 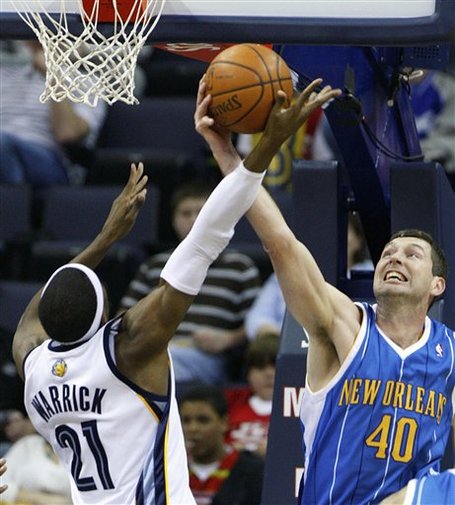 That last minute was excruciating, wasn't it? Marc Gasol just ate up the offensive boards, rendering any and all defensive efforts moot. Each successive O-board took the life out of whatever comeback ideas we had. Yet again, Byron was able to coax out a stellar defensive efffort out of team missing its three biggest defenders; for that, he deserves credit. If I'm not mistaken, the team's defensive efficiency has actually improved since Paul went out, and it's no indictment of CP. Byron's various junk defenses and zones stymied Memphis enough to keep us in it till the end. I mean, think about it. A lineup of Daniels/Butler/Peja/Bowen/Marks would be historically bad over an entire season. It would be far and away the worst team in the league. The fact that we competed for 48 minutes, shooting 29% (twenty nine percent!) is astounding. I've done my fair share of Byron bashing these last couple weeks, so I'm willing to give credit where credit's due.

The numbers above look bleak, but they should be taken with the enormous grain of salt prescribed above. Rasual Butler's 3-17 performance was historically bad (as I initially suspected). In franchise history, only one player has ever attempted that many shots and made so few- Rex Chapman went 2-18 twenty years ago. Daniels, D. Brown, and Rashool combined to go 7-40 from the floor, an 18% clip given generous rounding. Sean Marks was downright efficient compared to those guys, going 2-7. Overall, this was a shooting night to forget.

Staying on the subject of shooting, doesn't O.J. Mayo have a gorgeous stroke? The one thing that struck me most is the arc he got on fadeaways. Most players will line drive the ball at the hoop when fading, mostly due to lack of arm power. The only guy I can think of that consistently puts crazy arc on fadeaways is one Mr. Bryant*. I'm not saying Mayo is that type of talent, but that part of their games is very similar. Gasol is a really good young player as well. I doubt he ever becomes as fluent offensively as his Laker brother, but he's already a great defender. Finally, I don't think M. Conley Jr. is nearly as great as we allowed him to be tonight. He pretty much abused Antonio Daniels ankles at every turn, but he struck me as a little too out of control.

(*Well okay, also Dirk Nowitzki. But I don't think we'll see another guy like Dirk for a long, long while.)

Peja Stojakovic was the man in the 1st quarter. Then he pulled a Houdini in the second. 23 points is great, but it took him 22 shots to get it. I'm also a little concerned that the likes of Quinton Ross and Greg Buckner were able to shut him down with ease. Peja is obviously not supposed to be a go to, iso-scoring option, but I wouldn't have minded seeing some more assertiveness.

/Rampant Speculation Begin/ Let me start this next thought by declaring my awesomeness as a three point shooter. If I lived in New Orleans, I would most certainly defeat Byron Scott in that little Challenge the Coach Shootout thingy. Not exaggerating in the slightest. Give me a week's worth of non-stop shooting, and I could probably take Butler while I'm at it. Anyways, the reason I bring it up is watching James Posey shooting threes tonight. He ended up going 2-5 from deep, but the three misses were absolute shanks. Specifically, he "alligator-armed" them. Now alligator arms happen in two and only two cases- when you're under a lot of pressure or when you haven't shot the ball in a little bit. I think all good three point shooters will attest to this- you feel like you have perfect form, arms go up perfectly, you even leave your shooting hand hanging in the air all show-off-y.... and the ball clangs off the front iron. So my claim is that Posey didn't shoot enough this morning. Now if only someone would get me his phone number, and we could settle this once and for all... /Rampant Speculation End/

Everybody hop on the bullet train!

Anyways, I decided to try Lee's thing of listening to an album whilst writing. I went with one of my favorite albums of all times, Dark Side of the Moon. These lines and following translations from Time are probably a good precursor to Wednesday's Celtics Clash and Consequent Comebacks of Chris and Chandler.