I always associated Christmas 2008 with the final step in the demise of the 07-08 Hornets. A year ago, today, the Hornets were blown out by the Orlando Magic, including a 30 point deficit at halftime. That game would be a foreshadowing of the ridiculous six 20-point losses still to come. And as promising as the 2009 offseason looked, the success of the 07-08 team grows more distant by the day.

Forget 2007 though; have we moved forward at all, over the last calendar year? The early signs are ominous.

As disastrous as last year was, the team was still solid, if not spectacular: an offense, often chided for its stagnation, that registered the 12th best efficiency in the league, and a defense that came in at 9th. Nobody could mistake them for title contenders, but the team played most of the year without its starting center, in one of the tougher conferences of the decade. Their most memorable moment will always be that horrific New Orleans debacle, but that night did not define them.

Now? The offense barely scrapes along, below the league's average, just above the New York Knickerbockers. The defense is even worse, barely edging out that of the 2 and 27 New Jersey Nets. No team equipped with Chris Paul should be struggling to play average offense. The firing of Byron Scott was supposed to fix that, but one month in, it hasn't done much. Maybe the jury's still out on Jeff Bower's coaching abilities, but Utah, OKC, and San Antonio surely don't mind us taking our time. The hiring of Tim Floyd was supposed to fix the defense- in a way it has. Instead of playing the league's 2nd worst defense, we now play its eighth worst. Is that progress?

For a second straight year, the team's on-court performance has regressed considerably. But why? We're injured this year, sure, but we were (arguably) even more injured last year.

You know how every time I do a long post, it's always about why we suck? Well, this is one of those again.

In the last two years, quite a few things have deteriorated. For this post, I'll focus on shooting. At a 50.1 eFG% last year, the Hornets were glued to the league average 50% mark. This year, we're shooting 49.0%. If you think that doesn't sound like much, you're actually probably right. It's not huge, but it is significant. Who and what are the culprits?

The Repair Man played just 45 games last year, but he did get almost 300 field goals at a 57% rate. His replacement center, Hilton Armstrong, took 250 shots himself at a nearly identical 56% clip. This year, Mekatron is connecting at 51.5% of his looks.

But we can't say that Chandler/Armstrong were playing better offense than Okafor. They simply played different offense. A fair share of Okafor's touches have come on the block, with his back to the basket, looks that Chandler and Armstrong never got. Okafor's offense makes our attack more varied, if less efficient. His addition, though, has also moved us away from one of the staples of Byron Scott's offense- the pick and roll. Yes, the P&R made us stagnant, but that doesn't detract from how efficiently we ran it. The fact that Chandler and Armstrong shot almost identically from the floor (as starters) says it all. Okafor and Paul simply haven't found the rapport on the play, and much of it seems by design. In the long run, this could be the right move, but for now, it contributes to lower shooting efficiency.

JP's only the fourth or fifth option on the team, so it seems unlikely he could dent the overall percentages very much- unlikely, until you factor in how absolutely terrible his shooting has been. 15 for 38 on twos. 28 for 80 on threes. That's good for a 48% eFG; yes, a guy that has shot eighty threes has a eFG lower than 50.

Chalk this up to bad luck so far? Since the only other option would be to go cry in the corner, I think I will, yes.

Threedrag Stojarcaswish (or whatever Gil and Bob are calling him these days) has enjoyed a nice revival, shooting 41% on threes. But that belies an absolutely putrid performance from inside the arc. At 43-109, he's shooting 39% on twos. So at a 40.4% overall clip, he has to be one of the only players in the NBA with a higher three point percentage than overall percentage.

Having really enjoyed his role in Jeff Bower's cut-filled offense, I can't say for sure what's going on here.

I think everyone knows who I'm referring to... but I'm actually talking about multiple players here.

Perhaps one of At the Hive's world-famous "wait, how the hell do I read this???" graphs is called for. 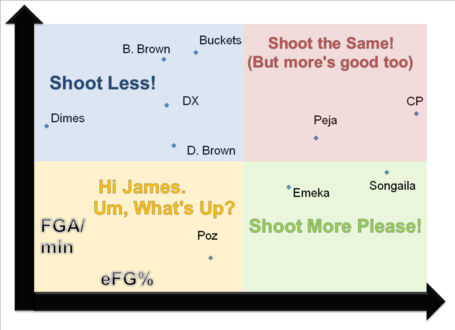 I'll give you a second to acclimate yourself to the brilliant color scheme and fonts.

Firstly, the graph seems to confirm something a lot of us have observed anecdotally: Emeka and Songaila convert a lot of their shots and would do well to shoot more. Ditto on Paul and Peja: both are shooting well, both should keep shooting.

The top left is the problem corner. There are multiple issues here: first of all, there really shouldn't be so many players there in the first place. Multiple inefficient players on this team are taking too many shots. This was true under Byron Scott (most of the Bobby Brown shots for the graph are due to him), but it's proving just as true under the Jim Flower regime.

Under Flower, the high usage/low efficiency focus has shifted from Bobby Brown onto Devin Brown and Marcus Thornton. Buckets, after a hot start, has especially struggled from the floor (both twos and threes), posting a 102 efficiency with a 26% usage. Devin Brown, meanwhile, was never hot to begin with, is not currently hot, and likely never will be hot. I can live with Thornton taking his shots; he's a rookie who only stands to grow as he gets more minutes. Obviously, one of his first challenges will be learning proper shot selection. Thus far, he's definitely shown questionable judgement at times. But the talent and room to grow are both there. His presence in the upper left is justified (as is Dimes' for similar reasons). Devin Brown's presence there is tougher to explain away. He's costing the team possessions now, and there's no long term promise either. The occasional splashed in three can make him look good every so often; the fact that he's shooting too much cannot be denied though.

The other thing that stands out in the upper left is David West's presence. DX has never been the most efficient scorer; his range and ability to shoulder multiple possessions per game are what make him a good foil for CP3. But this year, his scoring inabilities have reached new lows. Low shooting percentages, low foul rates, and low overall efficiencies have severely diminished his value. As long as he remains this unable to score efficiently, he'll remain in the upper left of the graph. Frankly, he's hurting the team right now, shooting wise.

There's no such thing as the "perfect" offense that puts every player in the upper right and lower left quadrants. But Jeff Bower will have to move as many players out of the upper left as possible if this team is to shoot well again.