Mo-Pete Hops in the Delorean

Share All sharing options for: Mo-Pete Hops in the Delorean

Morris Peterson has always been the definition of a fringe starter. There are reasons to sit him, but there are also some reasons to start him. And perhaps chief among those is the way he fits into most any offense. Nobody wants an invisible player on the court, but nobody wants the 5th man to stick out any either. For much of his career, Mo struck that balance well.

Five miserable performances into the 09-10 season, is his time in that role over?

A trip down memory lane may be in order to predict his future.

For starters, the precipitous decline in PER over the past 5 years is ominous.

It's not entirely unexpected either; wings in the mold of Mo-Pete tend to fade and fade hard as they hit their 30's. Two of Mo's most comparable players are George McCloud and Jaren Jackson... which is never a good thing. But while PER can be useful for comparing high value players, it often needs additional corroboration in its measure low value players who exist in different playing systems.

For example, in Toronto, Peterson's scoring role was far more pronounced. He averaged more than 3 FTA/36. In the long run, this seems pretty mediocre. Given Mo was averaged just around 10 FGA/game, though, it speaks to his more creative role. Upon his arrival in New Orleans, Peterson was transformed exclusively into a spot shooter. As much as people associate "Princeton offense" with Byron Scott (and others on that New Jersey staff, like Eddie Jordan), Peterson's role was hardly one characterized by off the ball cuts to the hoop. It was him hanging out on the corners or the wing, hoping for the kickout. It's only natural that his overall value would diminish in this system.

But how does one explain away Mo's decline with the Hornets? Changing system is one thing, but as we're all familiar with, the Hornets run virtually the same offense they did when Mo arrived.

Clearly, his skills are in decline. He can hit the standstill three, but he can't do much else at all. Then again, the Hornets need Peterson to literally do only two things: (1) make open threes and (2) perimeter defense.

Mo has looked awful to start the year because both those things, arguably, haven't been there. In terms of defense, images of Rodrigue Beaubois blowing by him on four consecutive possessions still lingers in my mind. But in a relative sense, who else do we have defensively? James Posey has lost a step on the perimeter; leaving him on small forwards and power forwards is easily our best bet moving forward. I'm more than willing to give Peterson some more time to evaluate his defense. The three point shooting? He's been poor; however, it's 5 games, and it certainly looks like statistically insignificant. 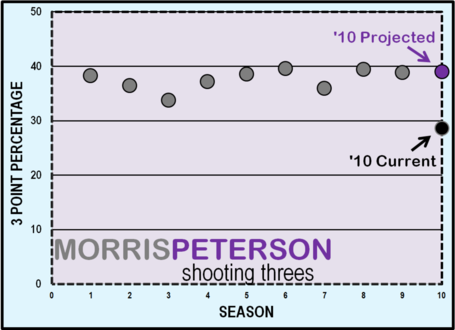 In the 9 years prior this season, Mo's three point percentage has never deviated outside of the 30-40% range. It hasn't come close to the low end since a poor third season in the league. Basketball Prospectus' projection system has him very similar to last year. Basically, it's too early to say that Mo has lost his three point shot; in fact, all signs point to the contrary. It's the one aspect of his game he's kept as he ages, and the one aspect he's likely to keep for a while longer.

The moral of the story: Morris Peterson may be done as an average basketball player, but in the role the Hornets have created for him, he still has value. The numbers say his shot will recover, without much doubt. His contract runs till 2011, and the two aspects of his game we utilize most- shooting and perimeter defending- will remain until then. Off the bench, the value of both those things plummets. He no longer has Chris Paul to create threes for him, and his perimeter defense is inherently less valuable if he guards the opposition's bench.

I'm all for Marcus Thornton getting minutes (as Byron has alluded to recently). From a relative value added sense though, I think it makes more sense to bring Thornton off the bench. From what we've seen of him at LSU, he doesn't need Chris Paul as much as Mo does. And Mo is the far safer defensive bet at this point. Essentially, Thornton can (potentially) do things off the bench that Mo cannot; on the flip side, Thornton's creative ability is diminished as the fifth starter.

Projecting Mo's future is tough; defending his recent play is even tougher. For all his struggles though, there still isn't a better fifth starter option on this roster.