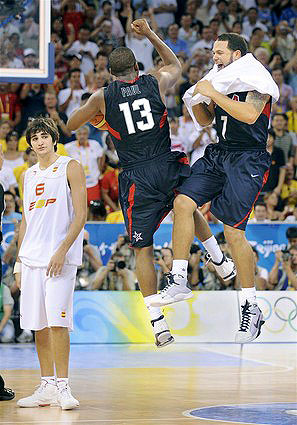 Really has nothing to do with the game, but I love this picture. Ricky, Chris, and Deron.

This was one of those games you could see coming from a mile away. Not that any of us Hornets fans predicted it- we were caught up in the big win over L.A. and the recent stretch of good play. But combine a road back-to-back with the end of a 4 game road trip with our hideous bench and this isn't anything extraordinary. It really was a classic case of the starters needing some assistance from the bench. They played heavy minutes last night in a pretty emotionally charged game, while the bench got to sit much of it out. Asked to provide a helping hand, the second unit fell flat on its face.

There is one positive tonight- the game isn't necessarily an indicator of gloom and doom in the playoffs. The back-to-back nature of the last two games really exacerbated our bench issues. The game was decided in the opening minutes of the second quarter, when the majority of our offense came in the form of Melvin Ely bricking free throws. In the playoffs, we'll at least be able to run rested starters out there. 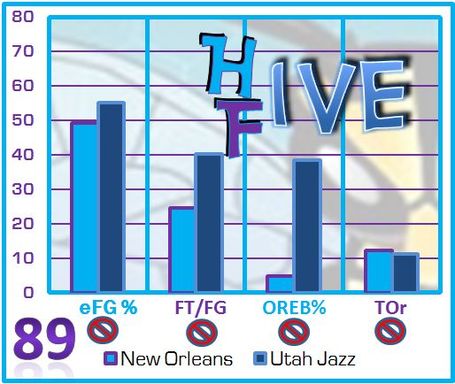 The most obvious flaw was the effort on the boards. At the end of the first quarter, the rebound rate was 5% us, 50% them. At halftime, it was 4% us, 40% them. The garbage time minutes of the fourth quarter diluted the true amount they out-worked us by. A lot of the blame has to be placed on Tyson Chandler. He played a mere 30 minutes last night due to foul trouble. And he responds tonight with four rebounds? Against a front-court severely lacking in depth and height? Unacceptable, even on the back end of a 2 game set. No way fatigue can explain that away.

Chris Paul outplayed Deron Williams as expected, but who cares? D-Will is now 9-2 against the Hornets. We were able to explain away the first few losses by pointing to our own various injuries. But they just smacked us down by 20+ without (arguably) their best player. The thing is, this loss really differs from their previous blowouts of us. Utah normally shut down Paul consistently by trapping him and taking away shooters. If you look up his previous numbers against UTA, they're awful. Tonight, we were in a great position to win the game. We played a respectable first quarter and just needed the bench to hold it together for 4-5 minutes before the starters checked back in.

The +/- will say the starters actually ended up giving away most of those points in the second quarter. In actuality, the bench set up all that momentum for Utah's offense before leaving- allowing shooters to get to their spots unimpeded and dribble penetration. When the starters did check back in, they were confronted with a flurry of transition buckets.

Oh okay, one more thing: Brevin Knight had as many offensive rebounds as the entire Hornets team. Chew on that one. Good night everyone.