Woo, did we ever need that one. 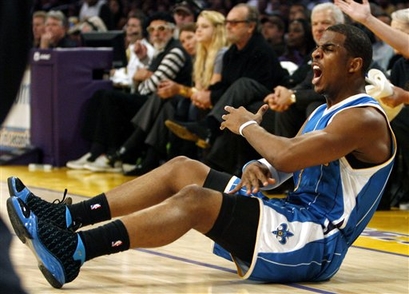 48 minutes of exhilaration. I feel like I just ran a marathon, what with all those crazy runs. 25-10 by them, then the next second, 15-0 by us. We withstood the full powers of Kobe Bryant tonight, getting a glimpse of what the Toronto Raptors felt coming their way on Janurary 22nd, 2006. Kobe's dropped 50 on us in that past- I still remember him cruelly dissecting our defense in Charlotte that one time, including the game winner at the buzzer. But this was something else. Three threes in 93 seconds? 34 points on 14 shot attempts at one point? It was Kobe at his finest. He finished with 39 points on 22 shot attempts; thing is, our own David West one-upped him with 40 on 23 shot attempts. And he wasn't even our best player. That honor should probably go to Chris Paul, who set up at least half of West's jumpers. After the jump is the new, extra-nifty, super-shiny Hive Five format. Get excited people! 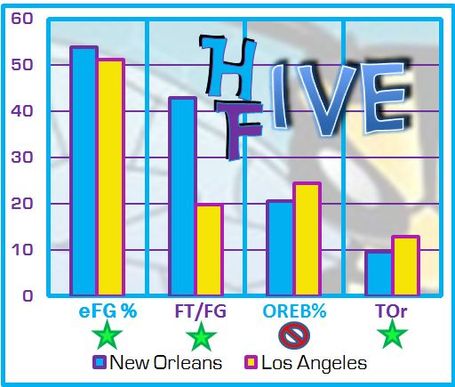 The hope is it should be a lot easier to visualize this way. A green star obviously indicates a plus performance, and that crossed out red circle thingy indicates the opposite. Now that your breath has been successfully taken away, I must ask you to direct your attention to the FT/FG bars. Unbelievable, right? Rate wise, we hit double as many FT/FG as the Lakers did... and L.A. is supposed to be the one going to the line all night long with all their star power. We simply were the more aggressive team tonight. The Lakers ended up taking 34 threes on the night to our 14. While they were hitting them at a crazy clip (47%), it ended up costing them in the end. During the brief period where they couldn't connect, we surged ahead via free throws and short jumpers.

Of course, it all starts with Chris Paul. Forget all the points and all the assists for a second. More than anything, I was impressed tonight by his quickness. I don't think he's had a game with more "burst" this year. The best example is the play on which Lamar Odom got hurt. I'll try to get video of this soon, since my words don't really do it justice. Basically, it was a hard trap on the top of the key; Paul shook Gasol with a fake and literally was at the free throw line before Gasol could turn his head. Odom ended up having to back-pedal hard, and I suspect that had something to do with his hyperextended knee. Paul hasn't looked this fluid all season. It's a great sign, going into his marquee matchup with Deron Williams in SLC tomorrow.

DX wasn't too shabby himself. Detractors will say that his 14-23 night from the floor and 12-13 night from the line was largely a function of Odom's absence. Truth is, West has struggled mightily against Pau Gasol as well. Even though Odom has been the primary defender on him, Gasol has seen plenty of time covering him and done an excellent job. So it was nice to see West go off against a player that routinely gives him trouble. Staying on the subject of Odom for a minute, I really like this win even though he sat out so much of it. Our offensive problems stemmed from the hard bottle-ups of Paul and lack of movement from the other players. While West's isolation plays were stifled by Odom, the overall team defense from L.A. had been the real problem. So even if you discount West's performance some, it makes less sense to discount the rest of our offensive success. Peja was constantly cutting across the lane, something we didn't see in the first two games. Butler hung out at the three point line a lot, but Posey was also involved in plenty of movement. I said in the preview that Byron Scott had to change something. And he did.

On to bullet land: