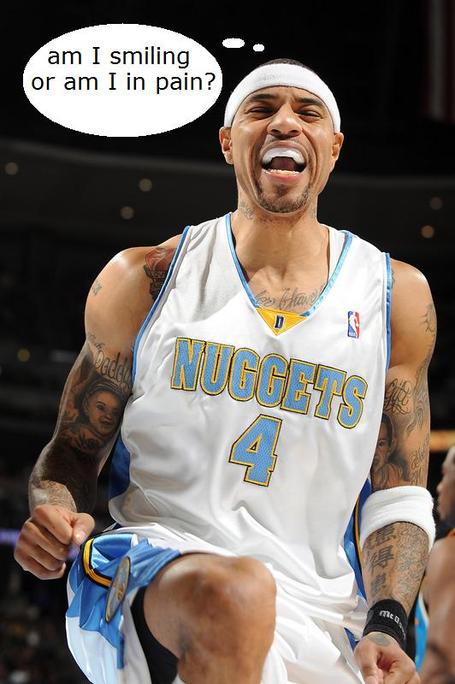 Well, I was only able to catch parts of the game (bad internet and no working TV), but here are some thoughts on the game:

- The first half was pretty sad. I was close to giving up on the game halfway through the third. The Bees had multiple turnovers and missed a lot of wide open jumpers. Even our regular ace James Posey missed more than a couple of pretty open three pointers. Posey went just 2 for 8 from deep.

- When the Nugs were up 26 in the third, I thought the Hornets might just give up, but I was dead wrong. Instead, we went on a 20-6 run and made it a game once more. CP3 definitely turned it on, he finished with 30 points, 11 assists, and 5 rebounds. The fact that the Bees could make it a game still impresses me.

- Denver seems a lot better with Chauncey instead of AI in the lineup, they are 22-9 after the trade. And JR Smith continues to impress me as a solid sixth man, he always seems to have great games against New Orleans. He scored 11 of his 17 points in the fourth.

- Hilton Armstrong is playing amazingly. He had 17 points and 5 rebounds, 3 of which were offensive. Hopefully he can continue this even when he comes off the bench.

- Uncharacteristic of Chris "MVP" Paul were his 7 turnovers, especially the last one.

There you have it, an end to the 4-game win streak. A bit of ugly playing by the Bees, but the way they bounced back earned them something. Still, CP3's quote sums it up:

We showed a lot of fight, but we lost. There aren't any morale victories in this game."