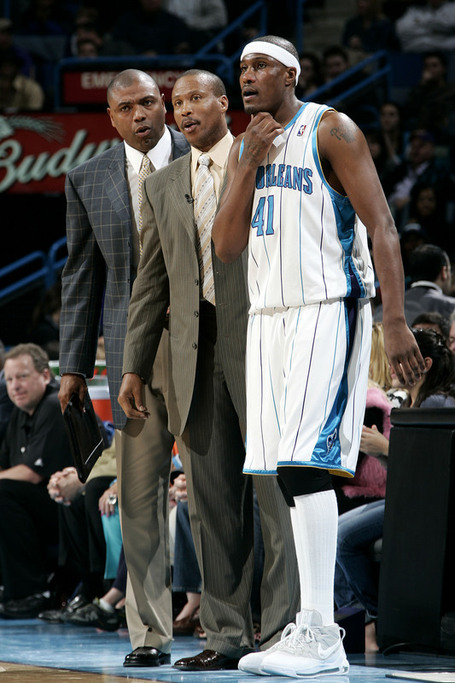 James: "Hmm, coach, what should we run?"

This game doesn't tell us much in terms of actual basketball play. I'm not that disappointed that we lost to the San Antonio Spurs in January, without our starting center. I am peeved at the way this team reacts to adversity. We saw a stark contrast in how a team can respond to questionable calls and tough situations last playoffs; the Spurs consistently shook off tough calls and kept their heads straight. We often lost our heads, picked up ridiculous technicals, and plowed into our opponents on offense to take out our frustration. None of that has really changed. James Posey picked up a horrible tech. David West picked up a horrible tech. Chris Paul routinely charged head-first and out of control into Tony Parker, simply to "avenge" perceived no-calls on the other end. Look, I'm not saying this game was officiated perfectly. There were plenty of... odd calls. But what exactly is gained from a expletive-filled tirade at an official? What's gained by colliding head first into a defender? The Hornets need to do a better job controlling their frustration, or this team will go nowhere, with or without Tyson. 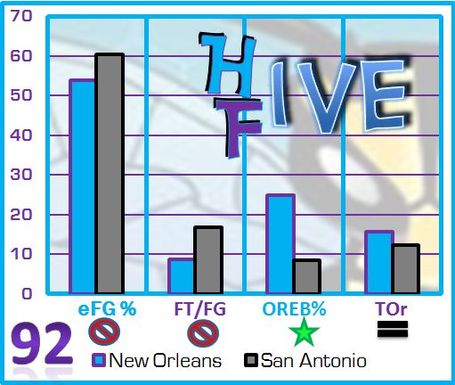 Let's start with shooting. David West was ice. James Posey was ice. Michael Finley was the opposite of ice. I think that about sums up shooting.

As far as rebounding goes, we actually had a sizeable advantage on the boards. Problem was, most of our offensive boards were Hornets' players blindly attempting to tip back their own missed layups. I think that about sums up rebounding.

On to some bullets:

Final note: this game belongs in the Byron Scott Idiocy Hall of Shame. What was up with Chris Paul sitting the first 9 minutes of the second? Someone pointed out in the game thread that Byron must have been anticipating Paul playing the entire second half. And Antonio Daniels wasn't playing terrible ball. But still, benching perhaps the entire player in the NBA for 9 straight minutes? In a game that you're down double digits? Makes no sense at all. Of course... he ended up not playing the entire second half. Why? Oh, because he hit five threes in a row, of course, and clearly needed to sit. Great job Byron Scott. Waste away the skills of possibly the best offensive player in basketball by sitting him in crucial minutes, and waste away his skills when he's on the floor by running one of the most simplistic and unimaginative offenses in the entire NBA.