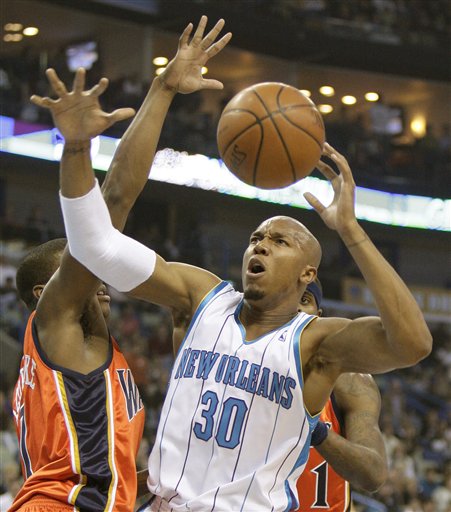 Can you say "trap game"?

After watching the Hornets defeat teams that were better than the Warriors without the services of DX and Tyson, everyone and their mom assumed that this game was practically a gimme. And why not? Last night the Hornets squared up against a streaky team with a poor record and David West was suiting up for the first time in six games. Easy win, right?

Wrong. The Hornets game out of the gate strong, winning the first quarter by 8, but then went ice cold from the floor for the remainder of the game. Both teams posted almost identical nmbers in rebounds, assists, blocks, turnovers. But the Hornets went 35.9% from the floor, 23.8% from deep, and 78.8% from the stripe, and the Warriors were able to walk away with the W.

The only Hornet who shot with any consistency was Paul. He dropped 31 points along with 8 assists, 4 rebounds, and 3 steals. Unfortunately, CP's one man show routine resulted in 6 turnovers. Absolutely unacceptable when you play a team that thrives on the fast break.

Truthfully, we didn't learn anything new from this game. The adage sticks: the Hornets stand a great chance to win if Paul and one other player are hot from the field. As we mentioned before, not one Hornet was "hot" by any stretch of the word. Consider that until late in the fourth, when Peja and DX made a few shots, no other Hornet (besides Paul) was in double figures. I know, I know: Dave Berri teaches us that points are not everything. But you still need them to win.

Not that other Hornets were trying to score; they just couldn't hit their shots. Despite his 15 boards, David only put up 12 points on 16 shots. Granted, some of those shots probably shouldn't have happened, as DX would have been better served to pass out of coverage, but for the most part he was missing shots he normally hits.

The bottom line in this story is that the Hornets gave up a close game to pretty good team. We can chalk it up to poor shooting, but I can't help but worry that we actually looked worse with West in the lineup than we did without him. Let's hope the guys find their stroke soon because we're going to need it for San Antonio and Portland.