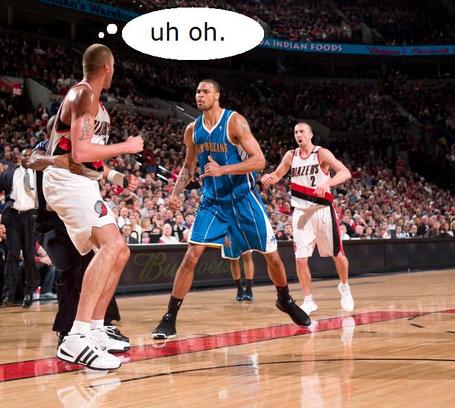 1) A win over the Blazers isn't exactly the same thing as a win over the Blazers without Brandon Roy, but I'll take it. The W extends the streak to four wins in a row, following a strong 10-3 finish in the month of December. After a lot of word that the Hornets are for some reason "not in sync with their coach", they've once again bounced back up the Western Conference standings. Byron Scott also won Coach of the Month for December (something that surprised me), but today we were once again graced with the mythical Devin Brown DNP-CD, which makes me happy.

2) Of course, the main interest of the game was the Tyson-Prissy "brawl". From what I saw, Pryz threw a forearm into Tyson's 6-pack, causing Tyson to retaliate a bit harder on Pryz's injured wrist. Then for some weird reason, Tyson was given a Flagrant-2 and ejected from the game. Although Tyson did deserve the punishment, I'm quite sure that Pryzbella deserved some justice himself. The Tyson-Prissy fued has been going on for at least the last two years, and this is the third time Tyson has been ejected from the Rose Garden. We'll all be hoping he's not suspended.

Ironically, the ejection gave rise to the Hornet surge of scoring. Said Chris Paul about what happened after the "brawl":

"I think we fed off that energy. We were talking in the huddle and that’s what really hyped the game up. We got excited after that."

The Bees went 13 for19 shooting in the fourth alone, outscoring the Blazers 41-19 in the 15 minutes after the ejection

3) I have to hand it to Hilton in the 23 minutes he played, he went 6-6 with 12 points. Although he only grabbed 3 boards, he was able to actually catch the ball and come up with a couple of really nice dunks. On the other end of the court, he also played some great D on Greg "World War II Veteran" Oden. I'm once again getting impressed with Hilton's play and still have this dream that he will someday become the next Dwight Howard. It was on my Christmas wishlist, but there's always next year, right?

4) David West and CP3 played some great ball (as usual right?). West absolutely tore up LaMarcus, scoring 25 points (12-21 shooting). It seems he's really got it back in the last few games, making his jumpers and getting a goodpost game going. I hardly even noticed Chris "MVP" Paul during the game, until the fourth where he just walked past the Blazers D and scored on a couple of driving layups. Those were the few plays that really delivered the Bees the game and sealed it. He ended up with 17 points, 11 assists, and 7 rebounds. In just 36 minutes.

And that's it for this one. As I said before, a win over the Blazers without Roy is not the same thing as one with him in it. Next game tomorrow against the Nuggets at Denver, hopefully you can stop by the game thread once again. And hopefully Tyson will be playing...