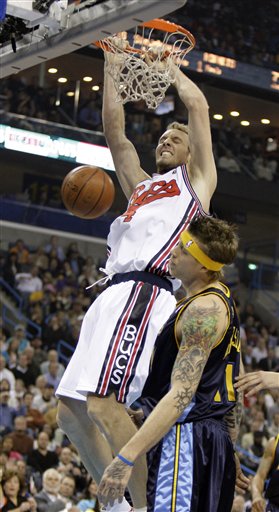 Tonight the Hornets faced a true test of their strength and will. In yet another contest without their two best post presences, the Bees were again looking to spread the floor and pray that a couple of guys would step up for big nights.

Remarkably, it worked. Again. Peja continued his hot streak finishing with 26 points on 10-14 shooting from the field. He also threw in five rebounds and three assists for good measure. For those of you following along at home, over the past two games Peja has dropped 52 points on 20-32 from the field (8-15 from beyond the arc).

The other player who stepped up? No, not CP3. Try again... oh forget it. If you didn't watch you'd never guess. Devin "Oh my God, please don't shoot" Brown played with a massive chip on his shoulder tonight, dropping 18 points on 6-7 shooting. Pretty much all he did was shoot, but those points came in handy due to an uncharacteristically off night for Chris.

The game started out extremely slow (at least for Hornet fans). In the first 6:30 of the game, we only managed 4 points. In fact, we scored those points within the first two minutes of the game. Between then and the 5:39 mark, here's a rundown of the Hornets' seven possessions:

Not going to lie. We were preparing ourselves for a blowout at this point. But leave it to this group to surprise you. By the end of the first, we were only down one and had actually owned the lead once or twice before that.

From there, it was all Hornets, as New Orleans proceeded to outscore Denver in the remaining 3 quarters and seal the deal. Got to say, I was impressed with just about everyone tonight. The entire team played, and not a single one of our guys mailed it in.

The opponent's take: Pickaxe and Roll