Not gonna go with the full on recap today... Tyson, David, and Hilton got the night off, didn't they? Let's just say my keyboard suffered an ACL tear. 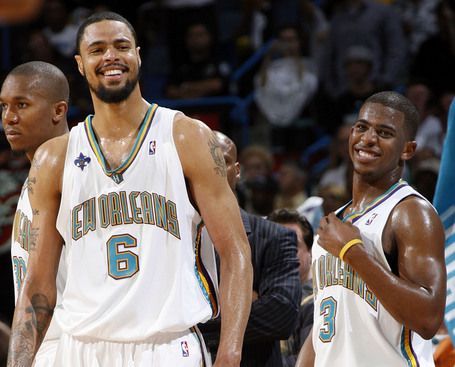 Anyway, we lost this game due to the three left most guys above. Yeah, that's Byron hiding out in the middle. I'm going to go so far as to give the Timberwolves zero credit for this game. Zero. We literally could not play a lick of defense against them. That's what happens when Ryan Bowen guards Al Jefferson. Seriously. Ryan Bowen guarding Al Jefferson. That's rich. No idea what Byron Scott was thinking on that one. Ely on Jefferson is silly enough over the course of a full game. But no, Byron had to come up with an even brighter idea.

The offense was stunningly effective. I'm still in shock that we scored 108 points in that game on 86 possessions. I have to chalk a lot of it up to pure luck- i.e., our red hot shooting from deep on some very contested shots. But none of us can complain about Marks' 10, Peja's 17, or Butler's 12. Posey's 24 came on a relatively inefficient 19 shot attempts, but he was the one who kept us in it.

Back to the where the game was lost: the defense. Throw Tyson Chandler or David West in there, and half of those wide open three attempts disappear. You have to give some credit to Minny for knocking the threes down. Honestly though, every team in the league has guys who'll knock down 20 footers. This is the NBA. I've seen Chandler drain 15 footer after 15 footer when nobody's in his face in shootaround. To put our defensive incompetence into perspective, consider this: Minnesota attempted 28 layups or dunks. Twenty eight. They took 78 shots, so approximately one in every three shots was an attempted layup or dunk. Not even Boston can play good field goal defense when that happens. Stepping out a little bit, 42 of their field goal attempts were from 5 feet or less. So there was more than a 50% chance that on any given possession, they'd end up taking a 5 foot or less shot. Finally, Minnesota hit 10 threes. How many were assisted? Try 10. When they weren't running around in the lane, they were gunning wide open threes all game.

This is what happens when Ryan Bowen, Sean Marks, and Melvin Ely attempt to guard one of the best and deepest front courts in the Association. A guy that should be an All-Star (Jefferson) vs. a guy that averages 15 games a season (Marks). A guy every team would've clamored for in the offseason had he left Minny (Craig Smith) vs. a guy with a 4.5 PER (Ely). The league leader in offensive rebound rate (Love) vs. Ryan Bowen. I think you can see why I'm not complaining about this loss, Bowen's minutes notwithstanding. Our hot shooting staved off the inevitable for a while. But this game was lost the moment the rosters were written down.