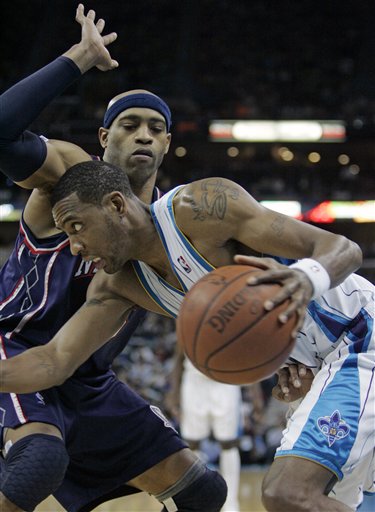 Hey, remember that time we all thought our bench was thin and couldn't hold a candle to any other team's pine-riders? Yeah, well tonight those guys showed up and they did it in fine form.

Let's face it: without D.West, Tyson, or Hilton, the prospects of the Hornets pulling out a victory tonight were fairly slim. At least so we thought. Turns out the theme of "everyone contributes" from Monday's victory over the Pacers carried over to tonight's performance.

What's funny is that before the game, my buddy Curry and I decided that if the Hornets and their depleted front court had to face one team in the league, we'd want them to take on the Nets. And that was before we found out that Chairman Yi would be out with injury.

So how did we do it? Well, Chris put up awesome numbers (again) while narrowly missing his fifth triple-double of the season: 29 points, 8 assists, 9 rebounds, 3 steals, and 1 block. Meanwhile, Peja also helped to pick up the rebounding slack, dropping a 20/10 for his first double-double of the season. In fact, Peja was particularly agile tonight. He was able to create for himself pretty well off the dribble and was real aggressive on the boards. Very impressed with his performance tonight.

But let's get to the real story: the bench. Even though some of them started, Ely, Marks, Daniels, Posey, and JuJu all contributed in major ways tonight. Posey went 10/7 and JuJu went 11/6 on points and rebounds. Ely, though only managing 4 points, added 4 rebounds, 3 assists, and 3 blocks, while Daniels added 4 assists of his own.

Bottom line is that Byron asked quite a bit from this crew tonight, and they responded well to the pressure. They were extremely physical on defense, refusing easy buckets with fouls (poor Josh Boone went 0-4 from the stripe), and out-rebounding, stealing, and blocking the Nets.

Hopefully, JuJu's contributions will prompt more playing time, as he was obviously a very positive factor on the court tonight, not to mention he got his second ovation in as many games when he first entered the game. But I think the more important thing to take away from tonight's victory is that this bench--for as much as its been belittled by journalists, analysts, and fans alike--can perform when it needs to. It's been a work in progress, but tonight it came together. If we can push leads with Paul/Butler/Peja/West/Chandler or with Paul/Daniels/Butler/Wright/Posey (one of the crazy lineups we ran tonight), then we can hang with anyone.