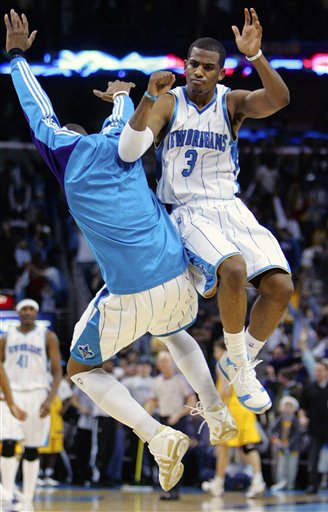 "I CAN'T BELIEVE WHAT I JUST SAW!"

Those were the closing words in my notebook from the Hornets' improbable rise to victory over a hot-handed Danny Granger and company.

Granger's insane fadeaway to tie the game with 2.5 to play nearly deflated the building, but somehow, someway Paul managed the same feat before the buzzer sounded over none other than Granger himself. The ensuing roar of the arena was deafening. And I've never been more happy to be deaf.

To set the scene, I should start by noting that David West (whose bobble-headed likeness was given out to the first 8000 fans, none of whom were me) was out with back spasms. This unfortunate news for the fans was met by news that was even worse: Sean Marks would start in West's place.

Needless to say, our offense was remarkably out of sync for most of the first quarter. It also didn't help that Danny Granger lit us up from every possible spot on the floor. Seriously, I think the dude's range is anything within 40 feet of the goal.

The Hornets were able to pick things up on defense and strung together enough successful possessions that the score was within 2 at the end of one. We looked so awful for the first 6 minutes that I considered anything within 5 a victory for the Bees.

The team started to get in a rhythm and gain steam (and direction) when our perimeter shooters started to get hot, particularly Peja (who finished with a season high 26 on 5 of 9 from deep).

Then, Tyson went down. Everyone held their breath as he rose, but our near-excitement was quickly quelled by the sight of Tyson being carried by Ely and Marks. It was a painful exit. Never mind that it left our already thin front court in the hands of Armstrong, Marks, and Ely. A scraggly bunch to say the least. It got even scraggly-er when Hilton went down as well... something in the water I guess.

Long story short, everyone contributed. The loss of 3 of our big men forced us to go small, but the good news is -- in case you didn't know -- the Hornets are overloaded with wing men. No one was particularly outstanding, but everyone made contributions (except for Bowen, who didn't dress, and Brown who... well, he was Devin Brown).

Team basketball was had and loved by many today, and the Hornets came away with an insane victory that will probably etch itself into this season's top 10 Ws. And that, my friends, is how you should spend every MLK day... minus the Tyson thing, of course.