Another 2-1 road trip. As ugly as losing at Utah and at Cleveland were, we've beaten the Lakers, the Blazers, the Mavericks, and the Pistons in January. Not bad. 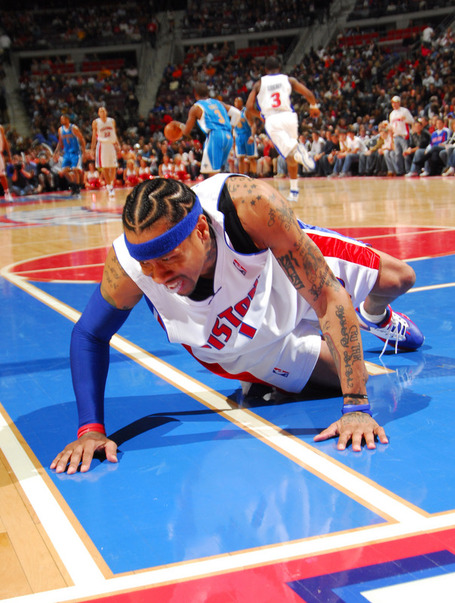 How far the great have fallen.

All game long, I only had one thought. And it had nothing to do with the Hornets. Specifically, what the hell has Detroit done to itself? What if they don't get a good FA in the summer? They've pretty much torpedoed a very, very good team for nothing if that happens. Obviously, they were never as good as Boston or Cleveland. But still... watching this new incarnation of the Pistons makes me sad. This is definitely the end of an era- an era in which two very good defensive teams in SA and DET had some great battles. It makes you wonder what the next era will look like. Boston's Big 3 is on the way down. It's questionable how much they'll factor in the next decade. Kobe Bryant probably has 3 or 4 high level seasons left in him, but he's already past his prime. Who are the next elite teams? Cleveland certainly looks like a lock to be one of them. That leaves possibly Utah, Portland, Orlando, and New Orleans to step up. Cleveland's the new Detroit, but who's the new San Antonio? I guess time will tell. Uh, some actual thoughts on the game after the jump. 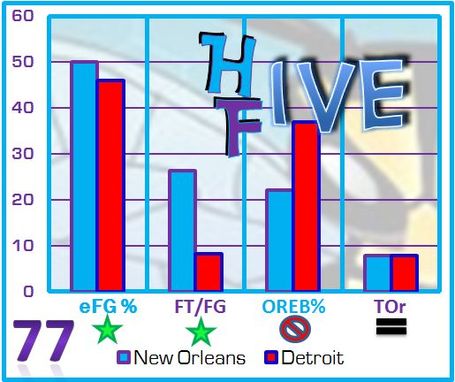 Let's start with the turnovers. One word: impressive. Chris Paul had 5 turnovers, the rest of the team had exactly one. That's totally crazy. On the flip side, Detroit finished with an equally impressive turnover total. Their ball control had a lot to do with Chris Paul failing to get a steal for the second straight game. The last time that happened was April 3rd-4th, 2007, when the Hornets posted back to back blowouts of the Milwaukee Bucks and Seattle Sonics.

The other impressive thing is the free throws. The first 10-20 games, I was really writing off our improved foul drawing as a fluke. Now, the evidence just keeps getting stronger and stronger. This team has legitimately improved over last year in terms of getting to the line. Tyson going 5-5 really helps. Between his 5-5 tonight and 6-6 earlier in the year, he's had some great foul shooting nights.

I saw that Niall noted on the 247 about the OREB difference, and whether we can pin that on laziness or poor coaching. Personally, I didn't feel like we got outworked that bad tonight. Detroit got a TON of "own-rebounds"- instances where a Piston would miss a 0 footer, get the ball right back, miss a 0 footer, and on and on. There's not much you can do about that. We were really aggressive in terms of blocking shots tonight, another thing that detracted from defensive rebounding. In general, I agree that the effort is lacking on the glass. Tonight, though, the numbers don't tell the whole story.

One last observation before I leave you, regarding mismatches. The last handful of games, we've been getting a metric ton of mismatches every game by running the pick and roll. Almost all of our opponents insist on switching the pick and roll and leaving a big on Paul and a small on West/Chandler. Yet we haven't really taken advantage of it too much. Why? Mismatches aren't inherently a positive. Mismatches are good when you take advantage of them. When Chris Paul is being guarded by Rasheed Wallace, he needs to drive the ball! Taking a fadeaway 20 footer accomplishes nothing. The shot isn't more likely to go in, just because he's being guarded by the "wrong" guy. A fadeaway 20 footer is a fadeaway 20 footer whether you're shooting over Stuckey or Wallace. Ditto for West. When he's guarded by Richard Hamilton, he needs to back him down or drop step into the paint. Falling away from 15, again, accomplishes nothing. We've been drawing mismatches left and right, but we utterly fail to exploit them. It's as if CP gets the switch on the S/R and then thinks to himself, "Oh cool, Sheed's got me. If I shoot an off balance shot jumper off my left foot while surfing the internet on my Black Berry, it's sure to go in. Cuz Sheed's got me. Duh." Blurgh.

Anyway, Hornets back at it on MLK Day vs. the Indy Grangers.