Chris Paul is good at basketball. 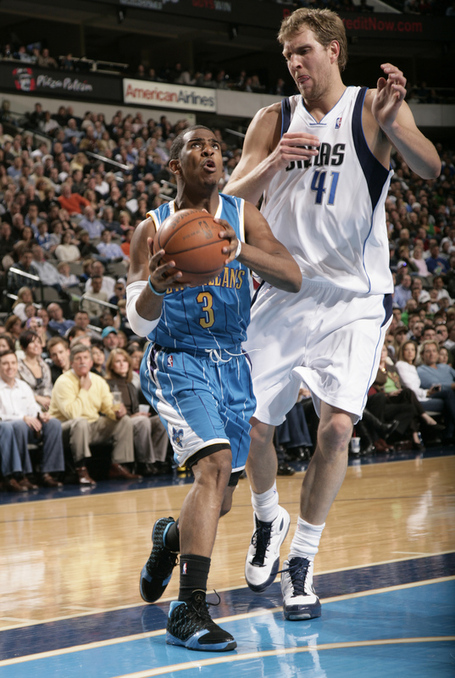 And they say basketball is a high flying sport.

Good to see Peja finally have a good game. He was easily our second best offensive option tonight. The idea that the Hornets "need" a third, creative scorer from the SG has been gaining wheels the last couple weeks, and it's not entirely without merit. But Peja can be a creative scorer when the offense requests it of him. Peja's iso post-ups can result in some of the ugliest shots this side of Eddy Curry- fadeaway 20 footers clanging off the backboard, horrendous turnarounds over guys half his size. If you look past the occassional hideousness though, the Peja iso is actually one of more successful plays we have in our arsenal. It's obviously nowhere near the CP-TC pick and roll or the David West iso. It has its positives though. Teams almost always put 6'6", 6'7" guys on Peja- tonight, Antoine Wright, Jason Kidd, and Gerald Green all saw time on him. And he shot right over the top of each one. Against defenders that don't pressure the ball that much, I hope we see more Peja isolations. Hopefully this is a turning point not only for his shot, but for the overall way the team uses him. 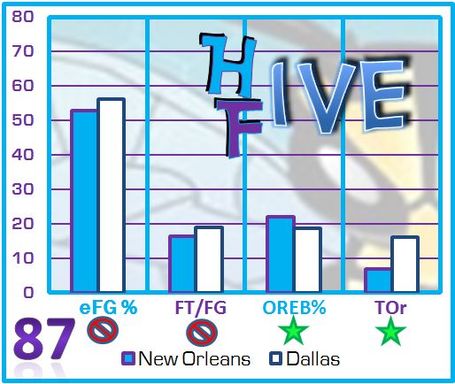 The most stark difference among the factors is turnover rate. We finished with a ridiculous 6 turnovers in an 87 possession game, while Dallas finished with 14. Thinking about that another way, we had 81 possessions on which we could've scored, while Dallas had 73. To quote Steve Doocy... "This is HUUUGE!!!" Anyways, leading the non-turnover charge (the turnover retreat?) was Mr. Paul. CP finished with 1 turnover and 1 "turnover." After the 7 turnover game at Denver, Paul now has 6 turnovers in 5 games. I guess we can safely say that all his talk about cutting down turnovers wasn't simply talk.

Offensive rebounding was the other place we shone tonight. One Mr. Tyson Chandler needs to be thanked for his 5 OREB contribution, but David West also came up with a huge, game sealing OREB down the stretch. Overall, it wasn't great offensive rebounding that gave us the OREB% advantage, but rather defensive rebounding. Brandon Bass and Erick Dampier- normally monsters on the O-Glass- were held to zero offensive boards. Huge round of applause to Chandler, West, Ely, Posey, and Marks.