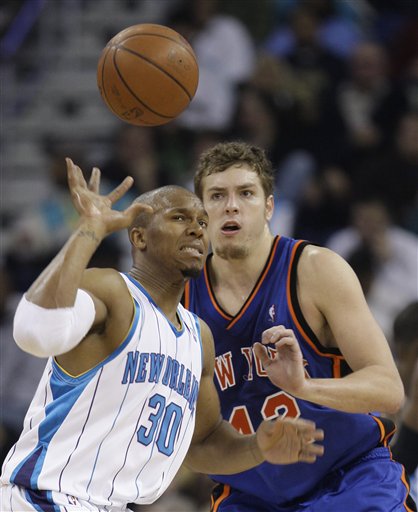 Well... that could have gone better.

I'll be honest with you: I didn't see the whole game. I was late to the show due to some overly long meeting. Regardless, the 18 minutes that I did see told me most of what I needed to know about this loss.

Byron doesn't know how to adjust. There's a lot to be said for imposing your style of play on your opponent and making them play out of their comfort zone, but if that doesn't work, then you're just being stubborn to keep trying a failed strategy. The Knicks ran the exact same pick-and-roll and backdoor cut all night long. And they worked. Every time. Really, they only needed 2 plays to beat us.

Why did those plays keep working? We never adjusted. We doubled Quentin Richardson every time he went into the lane. And guess what? He found David Lee open every time. Richardson finished with 8 assists and Lee with 24 points. All because we bit every time. I've never seen so many uncontested dunks from an opposing team.

David launched 20 shots and sank 6. His gaudy stat total (25,14,5) was a result of a 13 for 14 performance at the charity stripe. Nothing to sneeze at of course, but you've got to wish some of those other shots had dropped.

We were slow on defense. Maybe they just made us look slow. I just know that there were several times when Wilson Chandler or Chris Duhon would blow by their defender and no one would rotate to help out (David was especially guilty of this). Never mind that our rotation was abysmal for most of the night.

So, I'm already tired of talking about this game. We played poorly and showed up too late (an interesting theme for this year as whole).

Really I'm just bummed because I finally got my D.West jersey from my brother (a delayed Christmas present) and then had to sit and watch my main man, the one I chose to live vicariously through a piece of screen printed polyester, take several defensive series off.

It sucks even more when you consider that the score is within three in the final minute. It was anybody's game. But then the Knicks came out of a timeout, we failed to rotate, and Al Harrington iced the game with a mostly open trey.

A little aggression could go a long way. Oh, and a little adaptation.That might help.

Fool me once, shame on you. Fool me twice, shame on me. Fool me 847 times in a row, then the Knicks are probably walking all over the both of us.

Since I only saw 18 minutes of the game, I pretty much out of observations to share with you after the above mini-rant. Please feel free to add your own observations in the comment section.