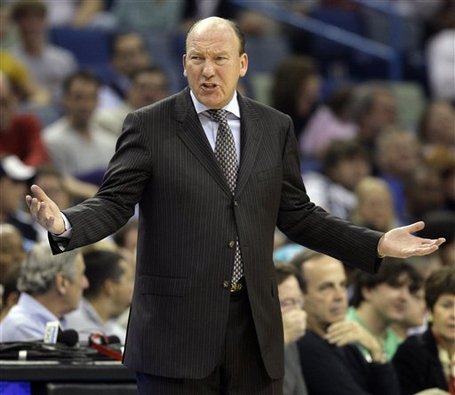 Hooray! We got to rest in our own beds and then demolish a shorthanded team that isn't too great even when everyone's healthy. Hooray!

Truthfully, though, this game wasn't fair. The normally lackluster Clips were hindered even further with injuries to Baron Davis, Ricky Davis, Chris Kaman, and Zach Randolph (for those of you who don't know, that list is pretty much their entire starting squad sans Eric Gordon). So yeah, it wasn't fair.

But, the basketball gods don't care about "fair" and the Hornets walked away with an easy victory despite only playing their starters about 30 minutes a piece. Chris and David had quiet (but solid) nights, while Peja showed signs of returning to his normal level of production.

The real story (if there even was one) was the the stellar play of Posey, Chandler, and Butler. In 26 minutes, Posey dropped 16 points, 4 rebounds, 4 assists, and 2 steals. Chandler, despite being grossly out-rebounded by Marcus Camby, went 13 and 11.

But it was Butler who had the hot hand and could not be stopped from downtown. Sure, I know, scoring is not the best way to extrapolate a player's contribution, but having been there I can tell you that his 27 points (6 of 10 from deep) was a huge boost to our momentum (though he did fail to contribute in any other statistical category).  After a holy-crap-did-he-forget-how-to-play-basketball? performance on the recent road trip--in which he managed to shoot 7 for 21 from the field--it was nice to see him get his stroke back. Would have been more helpful if said stroke had arrived in Denver with his luggage, but I'll take it all the same.

On the Clipper side of things, the only real points worth mentioning are that Camby pulled down 17 boards and Gordon made a few insane moves in the post that resulted in even more insaner lay-ins. He's got a way to go, but he looked sharp overall.

Well, folks... I'm afraid there ain't much more to tell. We were all hoping for a solid 20 point victory (especially given the Clips' injury situation) with limited minutes from our starters... and we got just that.

Tune in Monday when we host the Knicks and Eddy Curry on the pine. See you then.

Composed to: Gang of Four's Entertainment!