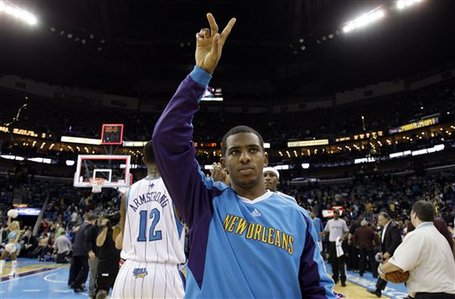 Sorry for being a little late on the recap. Wild night last night, but I'll get to that later. Let's do this.

Short version of last night's game: Hornets blow out Grizzlies and neither team plays their starters for more than 30 minutes. Done and done.

Our starters looked great, knocking down 60% from the field and playing solid D. Chris kept his steal streak alive and almost managed to put up his season averages despite the limited playing time and Peja looked like a man on a mission when drained 5 straight treys (only to miss his last 2 attempts). Coincidentally, it was "Vote for Peja" night at the Hive, so I guess he wanted to make a strong case for all the All Star ballot filler outers.

The Grizzlies generally looked out of sync with each other. There didn't really seem to be a game plan on offense (though it should have been get the ball to Mayo). They were a little more together on defense, but at 52% from the field, the Hornets had the hot hand and were virtually unstoppable.

That is, until the second unit came in the game. Keep in mind that Memphis also sat their starters shortly after we sat ours halfway through the third. So our bench was playing their bench. Not their starters, their bench. Fourth quarter scoring: Grizzlies 26, Hornets 16. Oof. Granted, most of those points came from Marc Gasol going up against Hilton, but still. Ostensibly the second took our 32 point lead and magically transformed it 19.

But it wasn't just another case of the second unit giving away the game (not even our bench could have pissed away last night's lead). It was worse in a kind of "I can't believe we still look this bad even when we're matched up with Memphis' scrubs." Seriously, we were flat out wasting possessions. It was turnover after poor shot selection after shot clock violation after offensive foul and back again. I'm pretty sure we opened the fourth with 4 points through the first 9 minutes of the quarter. 4 points in 9 minutes! Oof.

The weirdest part? Even though Memphis' second unit outscored us, you've got to wonder why they chose to just roll over and take the loss. I mean, why pull your starters? It was probably a long shot for them to actually come back (and we'd have put our starters back in eventually if that were the case), but if you're down 30, what do you have to lose?

So we whooped a team that appeared to have little drive to even win in the first place. Sound like no big deal? Well then, I guess you didn't read this.

Composed to: a massive hangover from celebrating the one year anniversary of Niall (of highly recommended Hornets 24/7) moving to the Crescent City... and a big cup of coffee.