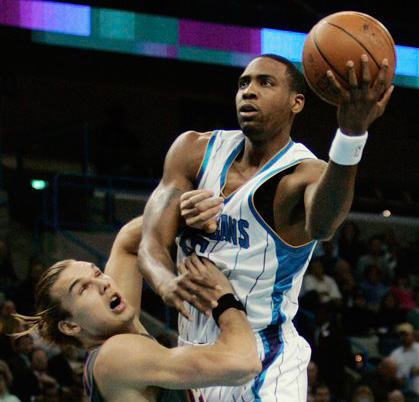 The Hornets are now 6-0 against the Suns in the last 2 seasons.

Last night New Orleans downed a very shorthanded Suns squad (they only dressed 8 guys) in a back-and-forth shootout that was often too close for comfort. So close, even, that I'm not sure what the outcome would have been if Phoenix had been able to play either Nash or the Shaqtus.

In a game where both teams hoisted up 19 treys a piece, the difference came down to the hustle stats. The Hornets outdid the Suns in rebounds (29-20), steals (9-6), and blocks (6-3), while tying in assists (20) and turnovers (13). Both teams were pretty average from the floor, but the Bees took an astounding 35 free throws to Phoenix's 19. I'm not calling home court advantage on this since the Suns were playing really aggressively, but that's a huge disparity nonetheless.

But to oolge over CP, Peja, and West's performances is to ignore the bigger story problem: our bench was completely inept last night. Byron put them in at the start of the second and they failed to score a single point in the first four minutes. Meanwhile the Suns went on an 10-0 virtually erasing our 14 point lead. It D.West on a tech foul shot to put the first point on the board that quarter. The Suns made us look silly for the rest of the second, outscoring us 29-16 (and taking the lead at times), but the Hornets roared back in the third. At the end of 3, the score was 82-69.

The bottom line in this game? Our starters looked fantastic: at times they seemed impossible to stop. But our bench looked absolutely terrible. Chris Paul cannot continue to play 44 minutes a night. He just can't. Our bench has to start stepping up and protecting our leads. There's no way we make a deep playoff run without them.

Speaking of playoffs, Ric Bucher's piece in today's Daily Dime predicts that we'll be the four seed come April, since there's no way we'll stay as "mediocre" as we've been playing. He then drops this line: "But it's worth noting that they started 10-6 despite the cushiest of schedules with loads of days off." While I'll admit that our schedule ended up being easier than I'd expected (only 9 of our opponents have had winning records), I'm surprised t see that Bucher thinks that our ridiculously spaced out schedule has been a good thing.  I vote "nay" on such a claim. In fact, I think the schedulers down at NBA headquarters did us quite a disservice by putting 5 three-day breaks in the first month and a half of our schedule. It gives us (or any team) too much time to dwell. And that's not a good thing. The more often you play, the better you'll play since the rhythm of the schedule should prevent you from beating yourself up too much over any one loss or getting to cocky over any one win.

Hopefully that logic stands true because our schedule is about to become more frenetic. Guess how many three-day breaks we get after next Wednesday's hosting of Charlotte. The answer is 1 (the All-Star game break). Time to buckle down, boys.