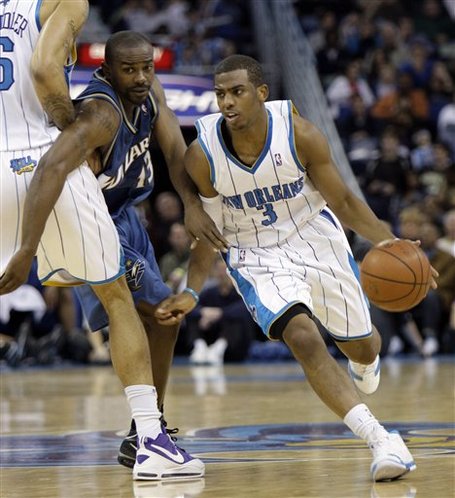 So, I think Mike James might be mad at us. And he let us know. Despite fouling out in the fourth, he still managed 16 points and 7 assists on 6 for 12 shooting from the floor. Keep in mind that his per game averages for the Wiz this year are closer to 12 and 4. Also consider that In 17 games with the Hornets (in which he played a total of 73 minutes), he put up 20 points and 7 assists (per 36 minutes comes to 9.8 and 3.4). Tonight's effort is the per 36 equivalent of 24.8 points and 8.7 assists. So, thanks for that Mike. Nice to see you try harder when you aren't moping about being a backup (which you will be again if Gilbert ever decides to play again). Whatever.

The Hornets pulled out a victory despite an unusually close score throughout the second two quarters of the game. In all honesty, a healthy Hornets team against a beat up Wiz squad should never have yielded as many lead changes as it did.

Chris managed his third triple-double of the year (which is the best mark in the league, remarkably), dialing in for 15 points, 16 assists, 10 rebounds, 1 steal, and 2 turnovers (one of which he dribbled off his foot). He only managed to go 4 of 10 from the field, but nailed 7 of 9 from the stripe so we'll forgive him. Tyson looked like his old self adding 11 points, 11 rebounds, 1 assist, and 1 block, while DX went crazy posting up on Antawn Jamison to the tune of 20 points (and 6 boards to boot).

Peja, on the other hand, turned in a lackluster performance. His cold shooting hand (4 for 14 for 9 points) was somewhat offset by his 5 assists and 3 rebounds, but let's be honest: that's not really what we pay him to do. With a primary jump shooter in a slump, someone needed to step up and save us from bricking ourselves into a loss.

Enter Rasual Butler and James Posey. The two wingmen knocked down a combined 8 for 12 from beyond the arc while playing solid defense all night (Posey even managed 2 blocks). Butler finished the night with a team-high 21 points on 8 for 11 shooting, giving Byron further proof that he belongs in the starting 5.

(We love you Mo Pete! Promise!)

Overall the Wiz looked decent considering their lack of Tough Juice and Agent Zero. Jamison dropped 22 points and 12 boards on us despite tough defense from D.West. Fortunately, he shot less than 50% while taking almost a third of his entire team's shots. Of course, who else was going to shoot? Juan Dixon? No thanks.

Now it's time to pack up and play some teams that really mean business. Our next four games are on the road and they are brutal: Portland, Denver, LA (Lakers), and Utah. Crazy. Hopefully we can win at least half of those.

Happy New Year. See you guys on the 9th.

Composed to: My buddy playing Rock Band on drums. My productivity in life is about to drop like a stone because of this game.