Probably should never have been that close, but hey, a win's a win. 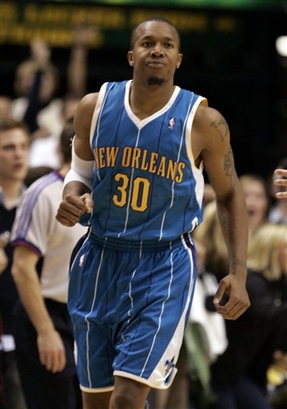 "Yeah, that's right. Did any of you seriously think that was not going in?"

eFG% (X) Chalk it up to luck, chalk it up to extra time in shootaround. Whatever the case, Indy absolutely lit it up from the field. 9-12 from deep, and Rasho Nesterovic hit a 19 footer with the game on the line. It was that type of night. Big ups to Danny Granger going 12-23, coming back early from a (nasty looking) concussion/neck injury. How many guys in this league would do that for a 10-20 team? You have to respect that.

3. FT/FG (√) We kept off the fouling for the most part. Other than Chandler (2 fouls in the 1st, 3 in the 1st half, 4 in 3, etc.), and James Posey, very few other guys committed fouls. On the flip side, Paul and West didn't get to the line as much as we're accustomed to seeing. And five missed free throws from Chandler drags down the FT/FG average somewhat.

4. TOr (√) Terrific job taking care of the ball. Our ball security was what kept us in the game even as Indiana went bonkers from beyond. Paul and Posey combined for 5 turns, but no other player on the team finished with more than one. Now is also a good time to mention David West- just 10 turnovers in his last 10 games. He's been playing great basketball recently, albeit quietly. And Paul's new steals streak has now hit 2 games!

5. Pace (93) Midway through the third quarter, I commented in the game thread how the pace was way too high. At the time, it was 98, and Indiana was threatening to run away with their shooting. When a team is lighting it up like the Pacers were tonight, you want to limit their possessions (and therefore, shot attempts). New Orleans buckled down in the 4th quarter and drove down the pace of the game substantially. The Pacers- the 3rd fastest team in the league at 95.5- struggled to adapt. Good coaching, good recognition from the players.

On an unrelated note, did you know that according to current All-Star voting, the top two guards in the Conference are Kobe Bryant and Tracy McGrady?