"We’ve got a ways to go," said Byron Scott. "You look at the elite teams, they bring it every night and that’s what we’ve got to get to." We certainly beat an elite team tonight. 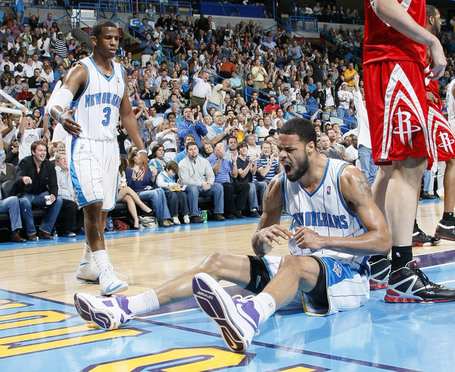 You know, it's funny. I was watching BOS-LAL yesterday, and JVG said something like "Houston is the only team that can challenge Cleveland, LA, and Boston." And I agreed with him completely. Now, a mere 24 hours later, I don't know if I agree with it at all. Basketball is a funny sport.  We can't be written off as also-rans just because we got beaten down in one game. We can't be elevated to contender status just because we played a great game against a great team. The dichotomy between today and yesterday almost de-trivializes the "one game at a time" cliche you always hear. On Tuesday, the Hornets were on a 4 game winning streak, smacking down opponents, getting into a groove, ready to face a Lakers team that had dropped 2 straight, lost its back-up PG for 2 months, and was wrapping up its second back-to-back on the road. They owned us. Tonight, we were limping off of back-to-back losses, including a humiliating blowout on national TV, versus a team that had won 8 of 11. We owned them. It's funny, you know.

eFG% (√) Chris Paul and David West dominated the first half from the field, then went ice cold in the second. Thankfully, Rasual Butler (6-9), Devin Brown (0-6), and Tyson Chandler (7-11) were there to bail them out. Defensively, the perimeter rotations were better than they've been all season. So good that I'll probably do a video post on our effort tonight. The hustle paid off; Houston went 5-19 from deep.

2. OREB% ( √) Tyson was the man tonight. Faced with the impossible assignment of Yao, TC held his ground and then some. 5 offensive boards against Houston's front line is an admirable stat indeed. The rest of the Hornets helped out Chandler a little bit; every starter, plus Melvin Ely and Sean Marks picked up an offensive board. On top of all that, the defensive rebounding was even better than the offensive. Houston was limited to 9 O-boards on 46 missed field goals.

3. FT/FG (X) A little too much fouling for my tastes. Granted, 5 of those free throws were off two ridiculous calls at the end (T-Mac getting "fouled" by Chris Paul and David West 23 feet from the hoop). But in general, you don't want to bail out a team at the line when you're playing such good field goal defense. I loved how Tyson was able to rebound from foul trouble. He picked up his 4th foul in the 3rd quarter, but played smart defense from that point on. Meanwhile, CP3 continued his free throw onslaught this season, making up for an off shooting night.

4. TOr (---) Paul had 4 turnovers, but the rest of the Hornets shored things up. With Hilton out, Melvin Ely took on the role of Turnover Machine, getting it poked free a couple times in 16 minutes of play. But the Hornet starters, minus Paul, combined for just 1 turn. On the flip side, Shane Battier was the only Rocket starter not to have a turnover.

5. Pace (85) An odd observation: generally, when a good team gets beat, it'll be reflected in the pace. A low pace team might lose more often at high pace, and vice versa. With the Hornets, that hasn't been the case. Win or lose, their pace always seems to be in the mid to high 80's. It's tough to get a read on this team through pace alone.

Hornets head to Indiana on Sunday. The last game of 2008 will be against Washington on Tuesday. After those two, we ring in the new year with this doozy of a road trip: @Portland, @Lakers, @Nuggets, @Jazz. Happy Holidays.