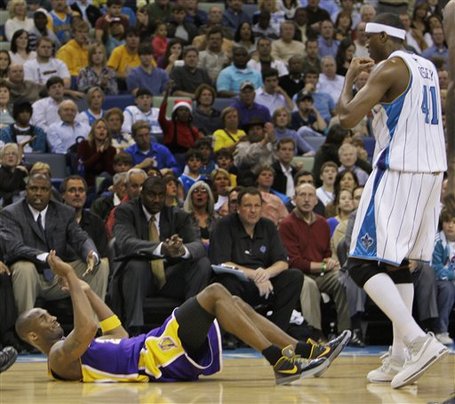 It was a heartbreaker. A step forward perhaps, but a heartbreaker all the same. After holding pace with the Lake Show for the first twelve minutes, the Hornets collapsed into a funk of poor shooting and fouling that wound up costing us a close game.

Our biggest problem of the evening was by far and away our percentages from the floor. Peja might have helped us there, but for the most part everyone looked a little off. CP was passing through double screens to a wide open D.West all night, but David only finished with 13 points on 5 of 15 from the floor. Meanwhile, Chris himself looked slightly offbeat, dropping only 6 of his 16 shots. That routine move where he finds his way into the lane and drops in a beautiful floater? That shot clanked on the back iron all night long.

It was miserable. Mostly because, as a team, the Hornets out-rebounded, out-assisted, and out-stole the Lakers (and they tied them in blocks). We had the hustle stats in our favor, but the 41% from the field, the 32% from deep, and the 63% from the charity stripe (on 22 shots no less) was absolutely killer. We beat their defense; we just couldn't make the shots fall, particularly at the line.

Give credit to the bench tonight, though. They took a stand and refused to back down. And by bench, I'm really just referring to Hilton, Posey, and Mo as Byron only used 8 players tonight (JuJu got two minutes of garbage time at the end of the second, but who cares).Mo was particularly good tonight with 16 points, 3 boards, and an assist after only 19 minutes of play. Hornets Hype is already calling for his reinstatment in the starting five. After tonight, I think I'm on board, too.

Before I write off this game as a complete squandered opportunity due to our poor shooting, I would like to take the time to address the very questionable officiating that occurred for most of the night. As I've noted in the past, there are stretches of games in which the officials appear to be favoring a particular team or player; however, it usually works out to be pretty even by the end of the game.

Tonight, that was less the case. Consider this: Kobe attempted 15 free throws, which is more than double his season average. The Lakers made more free throws than the Hornets attempted (28-32 vs. 14-22). Now, on a stat sheet, this probably doesn't look too crazy, but the game tells a different story.

First there's the story of fouls that were called. Kobe seemed to draw fouls at will. It was like the officials were calling fouls on the nearest Hornet every time he touched the ball. Unreal.

For those of you who are calling SHENANIGANS! on me right now because of Chris Paul's ever increasing ability to draw fouls, please hold judgment. When Chris does this, he draws contact in a perfectly legal way. Sure, the way he does it is kind of dirty, and I'm sure it drives opposing teams nuts, but the truth of the matter is that he can draw contact and then sell the reaction. Every team (or at least most teams) has a guy that can do this. And he often is the star of the team, and therefore he gets more free throws. Kobe is that guy for the Lakers (though, like the Spurs, it seems like everyone else on their team has at least minored in this course).

But tonight, Kobe didn't have to be that guy. Why? Because he wasn't drawing contact. I can think of three separate instances in which the replays showed no contact from any Hornet (let alone the one called for the foul). It was infuriating.

The other side of the coin was the plethora of over-the-backs and pushing-offs that the officials seemed to ignore from Lamar Odom and Pau Gasol (Bynum was much cleaner on defense). You know what... I don't even want to talk about this anymore... let's move on.

Check out the factors above. We played to pretty much a draw at shooting, rebounding, and turnovers. Free throws were the deciding factor. L.A. more than doubled our free throw rate.

The reason I bring that up is this: normally, the team that wins the FT/FG battle is the one that aggressively drives to the hoop. It's the the team that "puts the onus on the ref to make the call" as Reggie Miller would say. In this game, the Lakers attempted 17 shots "near" the hoop (defined as 3 feet or nearer). The Hornets? We attempted 23. Make of that what you will. We attempted 6 more of those close shots, and yet got to the stripe half as often? It's interesting. I won't say more than that. mW has a PG-13 extrapolation of this over at Hornets Hype if you are interested.

Bottom line: the Hornets played a very physical game with lots of aggression (and technical fouls). If a few more shots had dropped, we'd have stood a fighting chance to win. But, until next time, Byron's probably going to have them shooting free-throws at practice until their arms give out.

Merry Christmas, everyone. Here's to a better showing at Orlando!