Share All sharing options for: Breaking Down New Orleans' Rise

I've said many times recently that the Hornets are slowly returning to last year's levels. Chris Paul and Crew Krewe have navigated a few potholes in the road, and it looks like we're finally ready to gear up. Today and on Thursday, I'll be doing a 2 part look at the ways this team is both the same and different from last year's incarnation. Today, it's the offense and Thursday will be the defense. 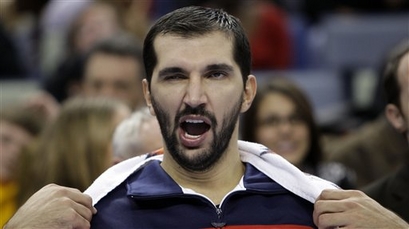 Only the bravest of souls dare awaken the sleeping Peja.

Last year, the return of Peja Stojakovic buoyed the Hornets' to a stellar eFG%. At 51.2%, New Orleans ranked 6th in the league at shooting the basketball. This year, Peja has sat out a few games, and one of the key cogs of the shooting attack- MoPete- has seen significant time on the pine. And yet, the shooting is as good as ever at 51.1%, once again good for 6th in the league. A lot of it has to do with Rasual Butler stepping in and not missing a beat. Some of the credit must go to Chris Paul, who is currently one of the two point guards in the L shooting over 50%. Finally, let's not forget James Posey, who ranks number 1 in the league in true shooting percentage.

The '07-'08 Hornets had a distinct advantage in ball-handling over most other teams: Chris Paul. Put the ball in the hands of perhaps the best decision maker in the league, and good things will happen. Last year, the Hornets ranked #1 in the NBA, turning the ball over on a miniscule 11.4% of possessions. This year has been a different story. Paul's turnover rate has escalated near Deron Williams' levels (read: bad). Statistics say it's an anomaly. Hopefully, time will tell the same.

One of the things that always surprised me about last year: even though Tyson Chandler was perhaps the best O-boarder in the league, the team only ranked 13th in OREB%. More than anything, it indicated that the team was relying on one source too much; cut that source off, and problems could ensue. Fast-forward to this year. The source has been cut off (relatively), and problems have indeed ensued. The Hornets currently rank 21st in offensive rebounding rate, behind such lowly teams as the Thunder and Bobcats. Tyson's recent games indicate that he'll return to last year's board-work soon. I'll be happy if we can crack the top 15 in OREB% at year's end.

Here we find one of the more stunning turn-arounds in the league. Last year, the Hornets were allergic to the free throw line, averaging fewer free throws per field goal attempt than everyone but the Wolves. This year, we've miraculously cracked the top 10. We get to the line more than double as often as last year. Who's responsible for this? Chris Paul, of course. He's getting to the line two times more per 36 minutes. On the surface that sounds irrelevant, but it's actually quite an increase. Now some people might speculate that this is due to Paul getting more "respect" from refs after his runner-up MVP campaign. Those people would be wrong. Paul's FT/36min this year represents a return to his rookie campaign. Paul's FTA/36, with 2005 first and this season last: 6.0, 5.5, 4.3, 6.7.

Last year, the Hornets were among the most efficient teams in all the land. Their 111.5 points/100 possessions ranked them 5th in the league. This year, the efficiency has dropped a little bit to 110.3. It's encouraging that the two categories holding back the offense- rebounding and turnovers- both seem like statistical anomalies. I'm not worried about either one unless there's no progress at the All-Star break. We can complain all we want about the offense stagnating at points. Just remember that there are 25 fan bases complaining even more.