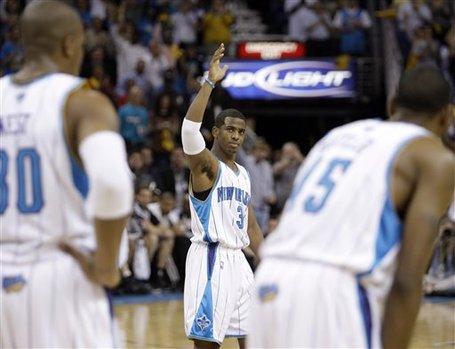 Every Hornet fan who bleeds purple and teal creole blue remembers May 19, 2008. And every one of us was out for blood tonight.

While we may not have drawn blood, we did pull off a solid victory that was punctuated (early on) by Chris Paul passing Alvin Robertson (who, coincidentally, was a Spur) on the consecutive games with a steal record. Paul struggled some early, and you've got to figure that the record weighed heavy on his mind. After he nabbed #106, you could see him ease up and settle into his game. After that he and a very hot-handed David West picked the Spurs apart

Last March the Hornet fans started a tradition of booing the San Antonio on every one of their possessions after a handful of questionable calls favoring the flop-tastic Spurs. The result: a 24-8 fourth quarter in which the Bees shut down their opponents in every conceivable way.

That tradition continued through the 08 playoffs (with inconsistent results), but tonight it paid off in spades as the Hornets pulled off a come from behind victory against their beloved rivals. The amazing part is that the Hornets did not win a single quarter until the fourth, when they pulled off a 27-13 run to seal the deal.

How did this miracle comeback occur without a sharp shooting Peja on the court? For starters, Chris put up a great line we've come to take for granted: 19 points, 12 assists, 6 rebounds, 3 steals. David went 21 and 6, and Tyson went 10 and 11 with 4 blocks thrown in for good measure. So, you could credit our starters, but I think the real story comes from 2 other facets of our game:

That reminds me: remember that time I said I was going to give Mike James 20 games before doing post giving a fair and balanced evaluation of his play? Well, here it is in shorthand: ANTONIO DANIELS! WOOHOO!

Y'all be good. See you Saturday.

Composed to: Mantronix's "Bassline" over and over again. I wish I was kidding.