I ended up catching most of the game via cell phone updates, and a little bit on League Pass afterward. So this will be box score observations more or less. 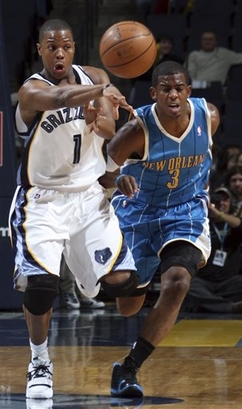 eFG% (---) Offensively, the difference between our three point field goals and two point field goals was stunning. A 10-20 (50%) effort from three helped mitigate an awful 16-42 (38%) night from inside the line. James Posey continued his ridiculously hot streak from outside; it's gotta even out at some point, right? He's only hit 40% of his threes one time in his career, but he's higher than 46% right now.

2. OREB% ( X) This was one of my (few) worries coming into the game. Memphis is a top 10 defensive rebounding team this year with Gasol, Milicic, and Warrick handling most of the glass word. On the flip side, we were a bottom 10 offensive rebounding team coming in to the game, and that didn't change. Tyson didn't get a ton of minutes (24) with his foul trouble, but picked up zero offensive boards. The defensive rebounding was pretty stout, but Hilton and Tyson combining for zero offensive boards in 37 minutes is worrying. O-Rebounding is one of the few aspects holding this team back from reaching last year's levels. Problem is, there's absolutely no light at the end of this tunnel.

3. FT/FG (√) If you read the blog last year, you'll remember that very, very few games were decided by FT/FG. This year, it's been exactly the oppostie, with FT/FG playing a significant role in a number of games already. This game was pretty much won on the line. David West and Chris Paul combined to make as many free throws (19) as Memphis attempted. And the rest of the Hornets chipped in 18 more free throw attempts. In a word, ridiculous, and a total 180 from 2007-2008.

4. TOr (√) I bet if you talked to Chris Paul right now, he'd mention his turnovers first, before the win, before his steals record. I keep expecting his turnover rates to even out to last year's rates... but we've hit the 20 game mark now with no regression in sight. Either way, he equalled Alvin Robertson's 105 straight steals streak tonight. He'll have a chance to break the record against Robertson's former team- the Spurs- tomorrow night. Any way you slice it, 105 straight games with a steal is impressive. Even if you think he gambles too much, even if you think he'd be better served sticking to his man, the streak is a testament to his defensive awareness more than anything. Good on him.

5. Pace (86) When you're facing high flyers like O.J. Mayo and Rudy Gay and your team is good at a slow, half-court style, it's definitely in your best interest to slow things. That's what Byron and Co. did tonight. I want to see this Hornets team run a little more at times, but not against Memphis.

Going back to my expecting Paul's turnovers to even out... that seems to be the Hornets' issue in so many ways. There are so many things that they "should" be good at and were good at last year- ball control, defensive rebounding, offensive rebounding, not fouling. The personnel really hasn't changed. The offensive schemes haven't really changed. Even opposing defenses are playing us exactly the same. It's more a matter of guys living up to what they've been doing for years.