I don't believe in "moral" victories for playoff teams, but hey, we were pretty short handed. There's really no way we were beating the Celtics minus Tyson Chandler and Antonio Daniels. 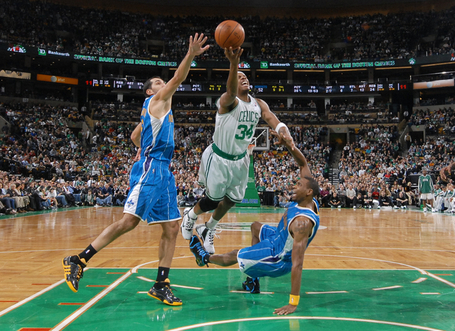 Says Butler: "Hey! I thought we were break dancing!"

If we had Chandler, who knows how this game goes. I don't think it's too much of a stretch to say Boston would not have gotten 13 offensive rebounds. If we have Daniels, maybe things are different. But that's all irrelevant right now. We lost the game, and we won't have the chance to play Boston full-strength for a while. What I'm more worried about is Byron's use of Peja Stojakovic. He's in the middle of a super hot stretch, and he gets two three point attempts? I realize he was being burned to a crisp by Paul Pierce. He was on the floor for nearly 30 minutes though, and in those 30 minutes, he was a total non-entity offensively. By my count, a grand total of three plays were designed with him as the first option. A couple times he got the ball at the top of the perimeter on broken plays, before hoisting. Three plays designed specifically for him though? What's up with that?

I'm more worried about the play-call out of a timeout involving Hilton Armstrong standing 18 feet from the hoop, holding the ball for 6 seconds, watching David West stand rooted to the ground before deciding to heave a brick. Out of a timeout, that's the best play we can come up with? Perhaps the strangest decision was Byron giving Mo-Pete four minutes of playing time with Paul Pierce lighting up the floor.

Our effort tonight, short-handed, was commendable. Byron's coaching was anything but. The factors after the jump:

1. eFG% (X) Defensive field goal percentage is where the Celtics thrive. They close out shooters, and they absolutely annihilate shots in the paint. Tonight, the second was true, but the first was not. New Orleans created wide open three after wide open three; Chris Paul was carving up the defense pretty easily. Unfortunately, Rasual Butler missed a couple momentum crushing threes, Brown missed the huge three down the stretch, and Peja missed his only two shots of the night. All 5 of those were as wide open as you will see, and none of them were close. On the flip side, the low paint was sealed off by Boston. The Hornets missed seven, very contested layups, and the Celtics came through with five blocked shots.

2. OREB% ( X) Surprising as it seems, this game wasn't lost on the glass. Some more rebounding may have given us the win, but David West, James Posey, and Sean Marks did an admirable job fighting for boards. Combined, they had 8 on the O-Glass. Kendrick Perkins was a beast for Boston; he did get away with a blatant push-off with the game in the balance, but he had a nice game on the glass.

3. FT/FG (---) Dead even. Our free throws kept us in the game the first half, but our fouling gave the game away in the second half. The two soul-crushing stats of the night: Boston reached the penalty with 8:00 left in the 3rd quarter, and 7:00 left in the 4th quarter. You will never, ever, ever beat the defending champions on the road when that happens. Pierce and Co. took full advantage, drawing some stupid fouls on the perimeter, and parlaying them into a free throw parade. Had they converted better than 63% of their free throws, this could have been a full on blowout.

4. TOr (√) CP3 was officially credited with 3 turnovers. The first one was Hilton Armstrong stupidly crashing into Paul and kicking Paul's dribble into the backcourt. The second was Rajon Rondo physically tackling Chris Paul in the backcourt, Paul ending up lying on his stomach, the ball rolling out of bounds, and the referees deciding that it was perfectly reasonable that the best point guard on the planet fell flat on his face for no reason.

5. Pace (88) It's easy for me to sit here and say that the Hornets should've pushed the tempo a little bit. That's a lot more feasible when you're playing Charlotte than it is against Boston. The Celtics controlled the pace of this game from the very beginning. While the final pace ended up around the Hornets' season averages, it was clear from the variety of "WIRED" segments that Byron Scott wanted New O to run. Give credit to Boston for completely shutting down the transition game in the second half; it was a case of a championship team understanding the one weakness that could potentially derail them and shutting it down.