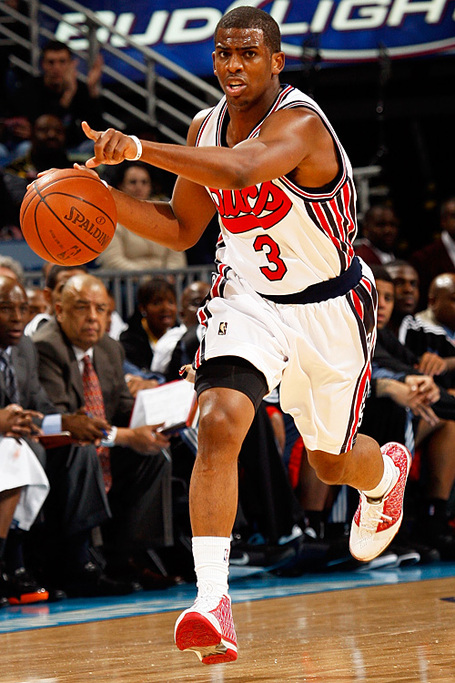 Tonight was a remarkable homecoming in so many ways for basketball in New Orleans.

First, the crew suited up in throwbacks from the long lost days of the ABA. Yes, the New Orleans Bucs took the floor for the first time in 38 years.To celebrate, the graphics crew added some nice hairdos to the team's intro photos. The highlights were Peja in a Jackie Moon 'fro and D.West in Malcom X glasses. Awesome.

The actual players from the Bucs heyday made the trip as well. From James Jones to Gerald Govan to Red Robbins to Larry Brown (yes, that Larry Brown). They were all in fine form and probably could have outscored the Hornet's bench.

Even members of the Bobcats got a homecoming. D.J. Augustin celebrated his return to his pre-Texas stomping grounds by dropping 28 points, 2 rebounds, 7 assists, 4 steals and a single turnover. He also managed to go a perfect 4 for from three point land and 6 for 6 from the stripe. Needless to say, he got a rousing applause when Brown finally sat him at the end of the game. See, we take care of our own.

And we traded Mike James. Yeah, I know: it's not homecoming-related in the slightest. Don't care. He's gone. I'm excited. Let's start winning some championships.

Oh, and the game. Yeah, the game was good, too. The Bees came roaring out of the gates, practically scoring at will. Peja made it rain like crazy (17 points, 5 for 6 from deep), D.West was a monster (17 points, 8 boards, 4 assists, and a block), and Chris was Chris (perfect from the floor and the stripe to go with 15 points, 15 assists, 4 rebounds, 2 steals, and 1 turnover). Oh, and at 31 minutes, Chris played the most among our starters.

One particular performance of note was Tyson's. He looked like his old self again, putting up monster dunks, rebounding everything, and playing an aggression I haven't seen since last year's playoffs. He finished with 13 points, 11 rebounds, and 3 blocks. More importantly, he had 6 offensive boards. Boy have we missed that. Wonder if the newest addition to the fam has something to do with this spark?

On the Charlotte side, there is little to talk about since we've already mentioned how Augustin scorched us. Overall, it was a lackluster performance from the Cats, but probably not the worst they could have done considering Gerald Wallace and Jason Richardson's absences (the latter of whom has played his last game as a Bobcat). They did show a bit of a surge during the fourth quarter, outscoring our bench 32 to 17, cutting our lead from 31 to 16. But... it's the Hornet's bench, so what are you gonna do, eh?

Let's just hope that Antonio Daniels makes the flight to Boston. CP will probably play all 48 minutes regardless, but our bench is going to have to help out a little bit if we hope to stand a chance in the garden. 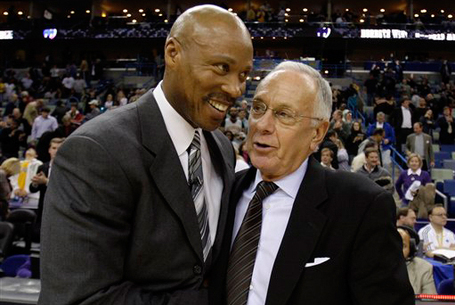