Share All sharing options for: Antonio Daniels, an Introduction

[Edit: Bumped back to the top since this is a little more important than beating the 'Cats.]

Javaris Crittenton is officially a Washington Wizard. Mike James' Super Nanny appearance will officially be made whilst he is contractually obligated to the Wizards.  Oh, and Antonio Daniels is now a Hornet. I haven't really seen too much of Daniels' play, other than that nasty crossover Allen Iverson put on him, many moons ago. Pradamaster of the awesome Bullets Wizards blog Bullets Forever helps me delve into Daniels' game after the jump: 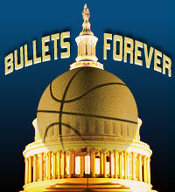 As I mentioned on the FanPost below this, Daniels and James seem very similar at first glance. Very similar age, somewhat similar body types, etc. But Daniels seems to have aged a lot better than James. Two years ago, they were very comparable players. In fact two years ago, James was one of the most coveted point guards in the league, coming off an awesome season with the Toronto Raptors. Eventually he went to the highest bidder (Minnesota), before promptly falling off the face of the Earth. He couldn't maintain his Raptor numbers, and the NBA world simply forgot about him. Daniels has had a similar drop off in production since 06-07. One key difference is that Daniels has been a lot more injured than James in the last few years. But how much of this can be chalked up to injury and how much to simple aging?

Bullets Forever: That's the million dollar question.  AD has been banged up this year, having bruised his tailbone and having missed a couple games.  He's also still feeling the effects of a wrist injury he suffered and played through last year, which probably did something to his production.  He elected not to have surgery to repair that wrist this offseason, so it's possible he's still feeling the effects of that.

At the same time, AD's turning 34 this March, and 34-year old point guards who can't shoot (this year's small sample size on threes notwithstanding) don't age particularly well, as John Hollinger likes to point out.  The other thing is that AD isn't your typical 34-year old.  Over the years, his attacking style has caused him to suffer many hard falls during his fearless forays to the basket.  He gets beat up probably as much as any other player does in the league, and after a while, you have to wonder if that has affected his long-term durability.

So to answer the question, my feeling is that he's definitely declining, both because of the age and because of the injuries.  The nagging injuries probably aren't going anywhere and he is getting up there in years.  But through it all, the dude is tough as nails.  You'll have to strangle him to sit him down, and he's also a great clubhouse guy.

So Daniels is one of the Dwyane Wade types (he's not that good obviously). He sacrifices his body for offensive effectiveness. Of course, that brings up an obvious question. How wise is it to have a single backup point guard option when that backup point guard gets beat up on a nightly basis? Does this move basically require us to go out and sign and insurance option?

My two answers to that would be: (1) As Bullets Forever points, Daniels plays through pain regularly. He's not going to sit out significant stretches unless he gets a really bad injury, knock on wood. His Games Played over his career attests to this; in 12 seasons he's been remarkably consistent. Over 70 games for 5 straight years, 67 the year before that, 82 the year before that. (2) Daniels won't be playing nearly the same minutes, as was pointed out in the comments section. He's averaging more than 22 a game this year, despite a variety of injuries. In New Orleans, I'd be more than thrilled if he was playing 13-15 minutes a game; that's 13-15 minutes of rest for Chris Paul, probably way more than he would ever want.

Let's move on to the defensive side of the ball. As many of you have pointed out time and time again, the bench is really only a good offensive distributor away from being good. The defense has been tough. In particular, the help defense and weak-side defense has been stellar. Devin Brown et al. have been allowing quick point guards to penetrate the lane, but James Posey and Hilton Armstrong have done a great job sealing off the interior. On top of that, Butler and Brown have played the passing lanes well, preventing easy kick outs (starters, you guys paying attention?).

So how does Daniels rate as a defender?

BF: Bad.  He's too slow laterally to stay in front of most point guards and he's too small to handle shooting guards.  Back in the day (like circa 2001 with the Spurs), AD was an excellent defender because of his quickness, but those days are long gone.  I wouldn't say he's totally useless, but he isn't very good anymore.  This season, the Wizards have been 12 points worse per 100 possessions with AD on the court (http://www.82games.com/0809/08WAS2.HTM#onoff).

The good news is that AD is at least a smart defender that won't gamble and mess up your schemes.  In that sense, you can survive having him out there if you have other good defenders on the roster.  But that does not make him a good or even mediocre defender anymore.

Sad to hear. Honestly though, I don't consider Devin Brown a great on the ball defender either. Nor do I think Jeff Bower intended to bring in a good man defender. The truth is that most 6'4" and above guys in their 30's simply cannot guard short, quick point guards. So we can't hold that against Daniels. I feel like the defense should continue to look similar to its pre-trade look: enough dribble penetration to be unnerving, but great help defense to cover it up. This isn't going to help James Posey out all that much, but hey, this is why we signed him, right?

If Daniels can give this offense some direction, the trade will well have been worth it. There was some discussion in the comments about Daniels' ball-handling abilities and his low turnover rates. Of course, the cynic in me had a few questions about that. How heavy was Daniels' ball-handling role with Washington? He's had very nice turnover rates, but how good is his dribbling?

BF: This is the upside with AD.  He still handles the ball a ton and he's remarkably surehanded with it.  He rarely gets the ball stolen away and he almost never has difficulty bringing the ball up the court.  In fact, in many ways, AD's a misfit for the Princeton offense because the system does not require a true point guard, which Daniels certainly is.  In New Orleans' system, which runs less Princeton (I know they run some) and more sets that involve the PG more heavily, AD is a perfect fit, at least for 10-15 minutes a night.  He doesn't turn the ball over and he can still create for others, even though he cannot create for himself anymore.

You are right that he has outstanding turnover rates in his career (though his TO rate is up a bit this season, I think it's an anomaly), but that doesn't tell the whole story.  Throughout his career, AD has been a guy who penetrates into the teeth of the defense, where it is much easier to turn the ball over.  That he has maintained his strong turnover rates doing those things is a major testament to his ball-handling skills.

So to answer that question, yes, he has outstanding dribbling skills.

Well, that's settled I guess. We get a guy that can handle the ball well, something the bench lacked. Bullets Forever has the last word:

BF: Overall, AD's an outstanding fit for New Orleans.  We had no use for him, not with us rebuilding a bit, but he fits in really well with you guys.  He's getting old, and he would have been an unbelievable pickup two years ago, but he still has a little left in the tank.  To get him AND a second rounder for the corpse that is Mike James is a major steal.  He brings exactly the type of skills you lack on your second unit.

Huge thanks to Bullets Forever for providing such in depth answers on short notice. My overall feeling is that Jeff Bower really came through with a good deal on this one (although from some sources I've read, this was supposed to be purely a Washington-Memphis deal before they needed a third team to help balance a few things out). We upgrade from a benchwarmer to a guy that can still play point, and we somehow got a second rounder out of it. Couple final things to add: Daniels has played in 75 career playoff games. He's also had very, very low foul rates in his career, which fits right in with our defensive schemes. To recap: a great dribbler, not so great man defender, creates well for others, doesn't turn over the ball, plays through pain, doesn't foul. Not going to lie, I kind of like it.