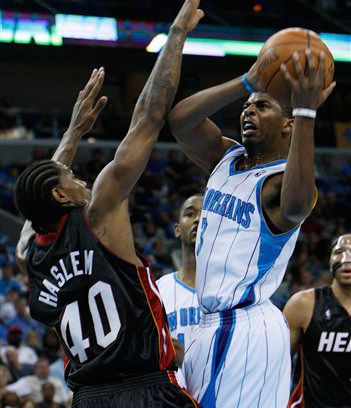 Welcome back, Hornets. The disoriented, sloppy crew who gave us two painful losses (one of which was inexcusable) did not show up to play Miami. Rather, something much closer in kin to last year's 56 win team arrived to take down D-wyane Wade and company.

CP was his normal, stellar self putting up 21 points, 13 assists, 7 rebounds, and 4 steals in 37 minutes of play. The Chef's dishing skills put 6 other Hornets in double-digit points (ok, Rasual only had 8 points) and none of those players was named James Posey. Basically, the Bees played some of the best team basketball I've seen in a while, with everyone contributing. We looked good.

Chris' performance made him the first player in NBA history to start a season with 6 consecutive 20-10 games, passing Oscar Robertson's 5.

What's better is that we saw the return of the Chaos Effect (first postured by mW of Hornets Hype). We had Chris dashing in and out of the lane, confusing the defense, drawing fouls, and finding insane looks all over God's creation it was a pretty thing. I mentioned in the last post, that CP shakes me on half of his fakes, and this game was no exception. In fact, at one point he was juking a player and half tripped over his own feet before recovering and driving to the hoop. This prompted my buddy Frank (one of the Super Bees) to remark that "sometimes Chris' head freaks his legs out".

The Heat, on the other hand, looked decent, if not a little out of sync. Posey and Peterson played D. Wade pretty well, though the stat line doesn't show it (because he's Dwayne Wade, dammit). He finished with 30 points, 10 assists, 6 rebounds, 2 blocks, and a steal. You know, I like this team in 2 years. The core of Wade, Haslem, Beasely (who will become a beast and sometime soon), and Chalmers is quite promising. But not for this season.

Getting back to the Bees, Mike James looked half half decent at the point. He finished with 10 points and 2 assists in 11 minutes, but he also managed to take some awful shots (one of which was a 2 on 1 fastbreak where he refused to pass to the open man, missed his layup, and made the crowd groan). Still, overall a good performance, especially considering that we never lost the lead while he was at the helm, which is ostensibly his job: not to undo CP's work.

But enough hatin' on Mike James. Even though I have to take blood pressure meds when he's in the game, I've decided to be patient with him this year. After game 20, I'll devote an entire post to whether or not we should thinking of him as a backup point guard or an expiring contract.

All in all, the Hornets played extremely well, moving the ball and spreading the floor. And it was nothing short of euphoric to see the team we know and love play for 48 minutes rather than the half-hearted schlock we saw for games 4 and 5.

Composed to: Medeski, Martin, and Wood's End of the World Party (Just in Case)