Mike James Was the Worst Player on the Floor Last Night... Right?

Share All sharing options for: Mike James Was the Worst Player on the Floor Last Night... Right?

Argh. I was an unabashed Mike James supporter in the summer. Inexplicably, I thought he could return close to 2006 levels of play if he was just given the opportunity. Alas. Things have not gone well so far. What exactly happened yesterday? A play by play. 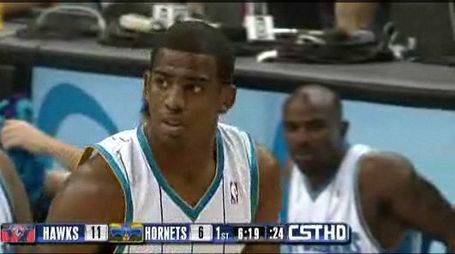 Is this the new Hilton for Tyson?

4:50- Marvin Williams gets wide open for three, opposite side of the floor from MJ.

4:30- MJ traverses the lane to knock down a one hand floater.

4:15- James gets caught going around a screen and Bibby gets a wide open shot (misses).

3:50- David West gets dominated defensively by Josh Smith, throwing an air ball at the hoop in desperation. James not involved.

3:34- David West with a lazy rotation to the three point line. Smith drills a three. James again not in the play.

3:15- Morris Peterson blows a layup off a nice feed from Tyson. James not involved.

3:01- Bibby shoots a three contested by Peterson and misses. James as far from the play as possible

2:40- Mo-Pete finishes a layup off a feed from Tyson. James not involved.

2:17- Mo Evans drills a heavily contested three on Posey. James in the vicinity but again not involved.

2:00- Hilton drives to the hoop and gets rejected as he takes a weak shot to the rim. James stands on the wing sadly..

1:40- James gets caught on the block with Pachulia. Stunningly, Zaza decides not to back down and throws a bad pass.

1:22- James goes to the rim with the shot clock expiring and gets his shot rejected by Josh Smith.

1:03- Joe Johnson outrebounds David West and Hilton Armstrong and has a putback over both of them.

0:49- David West with an aggressive move down the lane, finishes lefty.

0:00- Morris Peterson isolates for the last play of the quarter; he mishandles for a turnover.

11:15- James makes a nice drive and dish to Devin Brown, who misses an open jumper.

11:04- James with nice anticipation, jumps up and steals a pass from Hawks #5.

11:03- Fails to secure it, promptly has it poked away from behind.

10:38- Butler iso's and takes a horrific shot, early in the shot clock from 20 feet that barely grazes rim. James not involved (though he wishes that were him).

10:04- Devin Brown goes to the rim and misses a layup. James not involved.

9:50- James finds Posey on a semi-fast break, but Posey can't convert the layin.

11:50- Bad pass from James. Lucky recovery though, and he makes a nice drive to the hoop and gets Hilton a couple free throws.

11:31- Evans drills a wide open three from the corner, poor rotation by Posey (didn't think I would ever type that). James on the other side of the floor, not involved.

9:32- James apparently forgets about the shot clock and dribbles around until it expires.

Now those of you that actually read that whole thing must've noticed something immediately. Mike James was very, very, very rarely involved on a defensive play all night. It wasn't that he was not being active defensively, poking his hand in, whatever. It's that his man was consistently on the side of the court away from the action. There are probably 3 or 4 Hawks shots that he was even near when he was on the court. Virtually the same goes for the offensive end. He was involved in an unusually low number of plays- he'd bring the ball up, pass to West, and go stand on the wing for the rest of the play, by design.

His final box score stats (2 points, 1 assist, 1 rebound, 1 turnover, 1 steal in 11 minutes) look horrible. His +/- of -13 was worst on the team. But even a cursory look at the play by play above indicates that the -13 happened because other guys (Hilton, David West, Butler) were playing abysmal basketball while he just stood on the wings and watched.

Last night, I pretty much pinned the whole thing on him. It seemed like both times he came in the game, the Hornets' offense suddenly malfunctioned and promptly coughed up the lead. Looking at it now, though, it's apparent that it had as much to do with other guys playing horribly as it did with Mike James' game.

What is the point of this post? I don't know. I didn't expect that I'd be defending Mike James' game last night.. In fact, I envisioned a smack down of epic proportions. James isn't "good" per se, he still may not be the PG solution for a championship contender. But he isn't as bad as the circumstantial evidence might indicate.