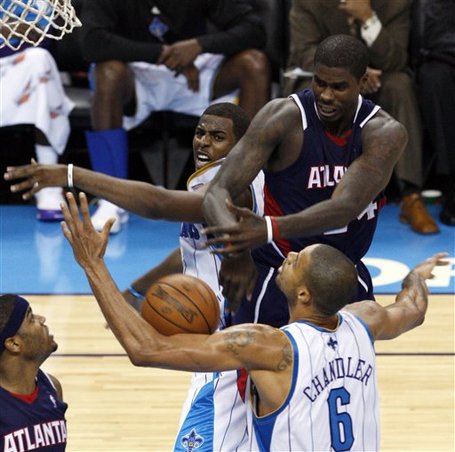 Congratulations CP3: you almost beat the Atlanta Hawks. It might have helped if the rest of your team had showed up, but alas, you had no such luck. Of course, you've really got to hand it to this Hawks team for dialing in a strong performance (especially after beating the likes of Orlando and Philly).

Anyone who tuned into this game probably doesn't want to relive it, but for those of you who did see it, here's the recap in a nutshell:

In a game when the Hornets led just once (with 2:11 to play in the third) and were unable to top 80 points, Paul's stellar line of 22 points, 11 assists, 3 steals, and 2 turnovers could not offset a disappointing performance from the rest of Bees. Of course, some of the credit for tonight's loss has to go to Byron. When CP collected his second foul 6 minutes into the first quarter, Byron pulled Paul and let Mike James run the show for 9 solid minutes. During that time, the Hornets' scoring deficit went from 2 to 8.

You may be thinking that this move on Byron's part was totally justified, especially when you consider that CP ended up playing 37 minutes. And while that may be partially true, consider that had Paul been left in the game, we could have been playing at a higher level and (hopefully) exchanging shots, which could've kept the score close. Instead, Paul had to come back into a game in which the Hawks were totally dictating the pace while holding a sizable lead.

I completely understand this strategy for big men as playing in the paint leads to more contact which leads to more fouls. But when it's your game-changer and he averages only 2.5 PF/G over the course of his career, you leave him in. Especially when your  contingency plan = Mike James.

So, to recap, I capital "H" Hate the "bench a player because he gets 2 fouls early" strategy when it is applied to a player who is either directly or indirectly responsible for most of the team's points. It's nothing more than a good way to lose close games.

Another major problem with the Hornets' showing was rebounding. We gave them so many second chance buckets, it was shameful. At one point, late in the fourth with the score reasonably close, we gave up 3 offensive rebounds in a single possession... which of course ended in an open 3. Oof.

But enough gloom and doom. We played a bad game, but we've also gotten off to a great start. Our next 2 opponents are the Bobcats and the Heat, and (though I won't call either an automatic win) I'd say we have a fairly strong chance at starting 5-1. Let's make it happen.

Composed to: Almost Killed Me by The Hold Steady

Correction: Misquoted the team assists when first published. Hornets finished with 24, Hawks with 19.