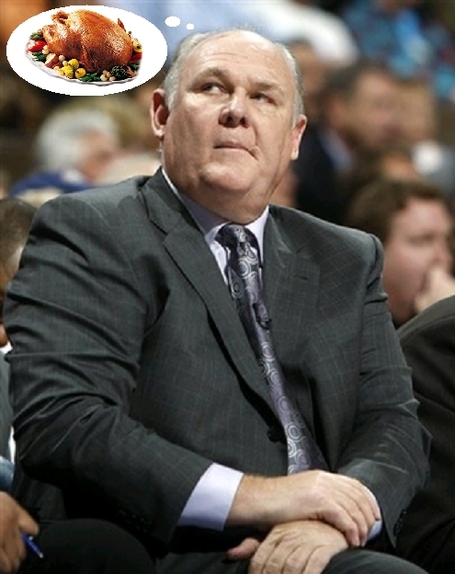 After botching a couple of double digit leads, the Hornets were able to get the W with some great clutch play.

1) Not having Tyson for this one (against a frontcourt of K-Mart and Nene) seemed like a major problem for the Hornets. However, Melvin and Hilton were able to hold down the fort, limiting the Nuggets' big two to just 8 rebounds. As Byron Scott said, after Hilton's performance against OKC:

That was the most aggressive I've seen him since he's been here. When he caught the ball, he made definitive moves. He didn't wait. So his attack mode was much more evident. Hopefully, that will continue for Hilton, because I thought it was really good.

It continued tonight; I was really impressed with the bench play. Rasual Butler hit his first 7 shots, finishing with 19. He's really emerging as a dependable player for the Hornets, making us wonder where he was last year. To cap it off, Sean "The Kiwi" played his first minutes as a Hornet, slamming in a put-back on his first offensive play.

2) Unfortunately today David West was not the dependable Fluffy we have grown to love. He shot just 6-16 in the 45 minutes he played. Normally he would have dominated the post as an offensive factor, but he finished with just 15. Maybe it was the lack of Tyson Chandler, who stayed home with his new son. Regardless, we're hoping he'll be back and hot for tomorrow's game against the Blazers.

3) Ex-Hornet J.R. Smith was great today. He finished with 32 points in 32 minutes, with 5 three pointers. He's really come to develop as a somewhat dependable 6th man on Denver as opposed to the Byron Scott doghouse-residing punk he once was in New Orleans. He scared us too much today, hitting threes in the clutch and making those "driving dunks". But I give him lots of props, once being one of my favorites during his stint in the Big Easy.

4) The end of the game was great, if a bit nail-biting. The James Posey sequence was great; Posey rushed in on a Melo three, giving him three free-throws, and culminating in a four point play. Then, on the other side of the court, he hits a dagger three. We also can't forget about Chris "Who's Deron Williams" Paul, who had a great second half and a great 7-0 run by himself. He ended the game with 22 and 10, his 10th game (out of 14) with 20-10 stats.

And that's all for today, thanks to everyone who stopped by at the Open-Game thread. It was a lot more exciting than shouting at the TV by myself. Good luck Black Friday shopping (for Hornets apparel, of course) and be sure to stop by for tomorrow's game against Portland.