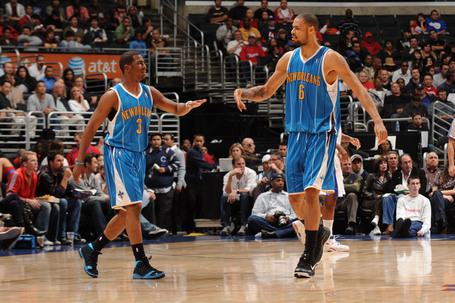 The CCC is back.

Another triple double for Chris Paul, 60 from D-West in two games. At least our All-Stars are rounding into shape.

1. eFG% ( √) More than anything, the defense was really impressive tonight. Minus a red hot Eric Gordon, the Clips went 24-67 from the field and a paltry 2 for 10 from deep. A lot of that has to do with New Orleans' great close outs on shooters and even better perimeter rotations. I've been going on about perimeter defense being our biggest weakness this year. I love that we got it done against an athlete like Al Thornton shooters like Baron Davis and Eric Gordon. Byron Scott has to be pleased with this road effort.

2. OREB% ( √) That's more like it. 3 OREB's for Mr. Chandler, and 2 apiece from West and Hilton. The Hornets topped the 30% mark for the first time (I think) this season, and they did it against Chris Kaman and Marcus Camby. Of course, the real story was Chris Paul pulling down 10 boards, Peja pulling down 9, and Posey drawing in 8. That's 25 boards from, umm, unusual sources.

3. FT/FG (---) Dead even. Devin Brown was a pleasant surprise, getting 5 freebies (all converted). Baron was the big foul man for the Clips, going 6 times. In a departure from his Hornet days, he actually managed to sink all 6 of them. In the end, Chris Paul probably should've gone to the line 2 to 4 more times. He took a couple of hits in traffic that were ruled turnovers.

4. TOr (X) Paul's 5 turnover line looks somewhat ugly, but again, at least two of the turnovers were clear fouls. Some nights, those calls just don't go your way. The steals streak was put in some danger tonight, but Paul quickly allayed fears by picking off a Davis pass early in the third quarter (which, as it turns out, was Baron's only turnover on the night).

5. Pace (90) Equal parts grind it out and up tempo. The Clippers would've been much more effective in the half court with Zach Randolph, so the tempo probably favored us a little bit. All in all, the Hornets' transition defense was much improved (or at least from the Sacramento game).

Some bullets to finish off: