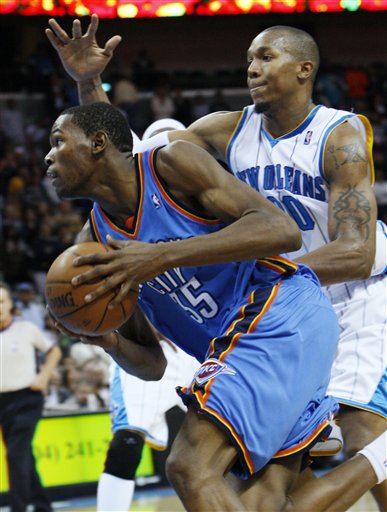 We've played better basketball, but a win's a win.

In the second game of a back-to-back against the Kevin Durants, the Hornets held the advantage every team statistic (except 3PT% and a tie in TO) and made a remarkable 23 of 24 from the charity stripe. The Team Formerly Known as the Sonics looked a little out of sync, but overall played much better than they did the night before. They actually managed to put up a good fight and were holding the lead by the end of first quarter. It took the Bees until about 8 minutes into the second quarter to make the final lead change. After that, Durant and company never stood a chance.

That's not totally true. While the Hornets were able to maintain a lead from there on out that fluctuated around the 10 point mark, there were still pretty visible holes in our defensive performance. Our rotation was quite poor for most of the first quarter leading to a lot of open buckets by just about everyone on the opposing squad. Jeff Green dropped 11 points on us in the first 12 minutes. Not good. The Hornets got progressively better throughout the game and, though they were able to close out with the W, need to address some of these deficiencies before they start playing tougher teams.

In related news, CP3 put up a triple-double. And he kept his steal streak alive. And it turns out that he is infallible when it comes to draining floaters. And yes the stat line of 29 PTS, 16 AST, 10 REB, 3 STLS, and a block is making me pee my pants with delight... but I'm not sure that his performance is as good a thing as it seems. Unless, of course, he's on your fantasy team. Then it's nothing but awesome.

But seriosuly, oogling over CP's numbers allows one to ignore a problem lurking just below. Permit me to explain. Byron played Chris 44 minutes. 44. This was partially due to his backup Devin Brown rolling an ankle after only 6 minutes of play. With the Hornets down (at the time) and Mike James being... well, Mike James... Byron opted to keep Chris in the game to try and regain the lead before the half. And then we got the lead. And then we opened the lead. And then we continued to hold the lead. After the third, I became convinced that CP was only in the game to finish the triple double he was methodically amassing. And while that stat is quite impressive, Chris could have pulled that off any night he plays 44 minutes... it doesn't even have to be against a 1-13 team.

The problem? Byron's decision to let Paul play all but 4 minutes of game that we were leading comfortably through the entire second half makes his decision to bench Paul during an epic collapse to the Kings last week even more befuddling. That decision makes zero sense. In fact, tonight would have been the perfect night to run JuJu at the point (one of Byron's more interesting projects) for more than 2 or 3 possessions.

I just don't get it. And that's before the decision to keep playing Hilton. Again.

Only one other Hornet had a strong showing outside of CP's performance: David West, who chimed in with 33 points and 8 boards. Actually, Chris and David combined for 37 of the Hornets 72 shots. That worked for tonight, but the rest of the squad is going to have to start knocking down shots if we want to keep winning games.

On the flip side, Kevin Durant, Jeff Green, and Russell Westbrook all looked pretty sharp. Durant lit us up for 30 points, but he was doing it so quietly, I didn't even realize it until the end of the game. Westbrook also impressed by dishing out 11 assists and grabbing 3 steals in 30 minutes of play. He's going to be pretty good if he can rack up that many assists on a team as bad as this.

All in all, it felt good to win a game we were supposed to win in our own arena. I think we still have a few things to address, but we have plenty of time and another cushy game (at the Clips) to get back into sync.

CP had a crazy-awesome fake on Jeff Green that I can only hope finds its way to youtube. It was like 8 different kinds of sick.

We used the double-team a lot tonight; however, there were several occasions where we used them against players not named Kevin Durant. KD made us pay on at least 2 of those by sinking wide open treys.

The Hornets are now on a winning streak after tonight's win. Unfortunately, it's only the second one of the season (after starting 3-0). Oof.

Holy crap, Melvin Ely is the spitting image of Chris Wilcox. Ok, so the espn photos don't quite sell this, but believe me. It's true. I mean, Ely mentioned that in his funny (but poorly titled) blog on the Hornets website. And I believed him and all, but the similarities are so much more remarkable than I would have thought (after all, I've seen both of these guys play before). Maybe we can switch them when no one's looking. The Wind Energy Bison Marshals would be halfway through Texas before they noticed... oh wait, can we switch Hilton instead.

A bit of good news for the Bees: after the December 10th game against Charlotte, those crazy Saturday to Wednesday breaks between games will be behind us. I really hate those stretches. It seems good to get the rest between games, but we've been struggling (in case you've been sleeping for the last month) and I think it's partially because we go a little cold in those stretches. It's one thing to be fresh for a game, it's a totally different/worse thing to be cold.

Oh yeah, CP3 had a triple-double.

Anyone who thinks that all CP cares about is stats, consider that Chris stole the ball at mid court with 9 seconds to go in the game. And while he could have driven all the way down the open court and tallied 2 more points. He pulled up and dribbled to the sidelines. Staying in to force the triple double felt a little sour, but the classy move at the end was a nice touch.

Composed to: the silence and satisfaction of eating a free chicken wrap from Popeyes that comes with your team's victory.