If only our return to Charlotte had been this easy. 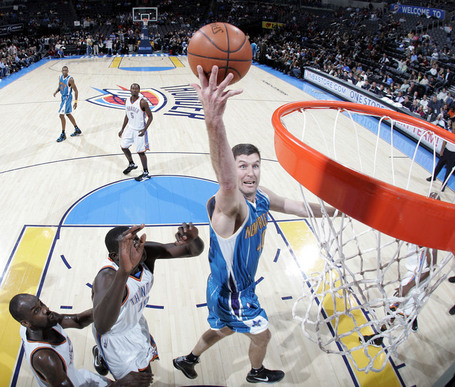 The Thunder cower in fear... of Ryan Bowen. Yeah.

That sure was a change of pace. I'll keep this brief and jump straight into the factors.

1. eFG% ( √) Considering that Butler and Stojakovic combined to go 8-26, the 54% eFG figure is pretty impressive. Chris Paul shot 6-9, West shot 6-11, and Hilton chipped in a 6-7 night to balance things out. But the best part was obviously the defensive eFG% allowed. Kevin Durant was kept in check while virtually every other Thunder (Thundii?) was owned defensively. 4 blocked shots from Mr. West was 4 times the block total by OKC.

2. OREB% ( X) Major double take on this one. We got annhilated on the glass. No other way to put it. Yes, yes, I know OKC obviously had more opportunities at OREB's because they missed so many shots. But keep in mind that OREB% is a rate statistic- offensive rebounds per opportunity. Even when you factor out the insane number of misses by the Thunder, the Hornets' 3 offensive boards is just way too measley. Chris Wilcox and Nick Collison are two of the more underrated rebounders in the league. Still, the offensive rebound totals have been reason for concern thus far.

3. FT/FG (X)  I've said this a million times already, but it's worth saying again. How has one of our biggest strengths defensively turned into one of our Achilles' heels? Last year, we were the least foul prone team in the NBA. We simply didn't foul anyone, anywhere, anywhy (whoa, spell check thinks that's a word). And now we give up 29 free throws... to the Thunder. What in the world is going on? Russell Westbrook- a rookie point guard who has been dead awful from the field- went to the line 6 times. That's 2 more than MVP runner up Chris Paul. That's unacceptable.

4. TOr (√) Nice work. The steals streak is still alive, and that Alvin guy should be seeing CP3 approaching rather quickly in the rear view mirror. 3 turns from Hilton, but nice job from everyone else. On the flip side, Oklahoma lost the ball a staggering 25 times.

5. Pace (98) Nice to see the Hornets flex their high pace muscles every once in a while. Judging from post game interviews and stuff, Chris Paul and Co. much enjoy playing high speeds rather than the slow, drawn out half court game that Byron likes to employ. Interesting decision to push the pace on the first night of a home and away back to back. Then again, it's a home and away back to back against Oklahoma City, meaning anything goes.

I hate to be negative after a 25 point win, but the Hornets had some serious flaws. I'd like to think that it's a return to the fun and games of last year, but being severely outrebounded by the OKC Thunder is not a good thing. Neither is sending them to the line 29 times. Neither is getting 3 offensive rebounds. Honestly, if this game were against Sacramento... I don't know that we win.

It's nice to believe this is a turning point and all that. I'm just not convinced.