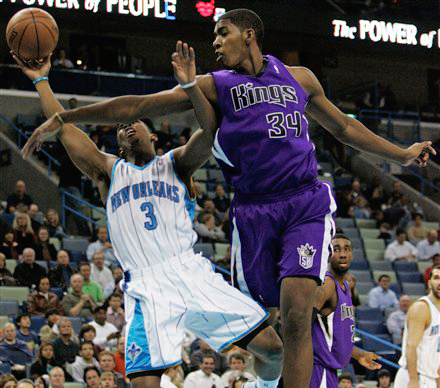 Ugly. That's a pretty good word for it.

Actually, outplayed isn't really the best word for it. The team stats were almost identical in every category with one solitary exception: 3 pointers. New Orleans dropped a horrific 2 out of 13 from beyond the arc, while Sacramento made a merely average 7 of 19. But last night, average was enough. And that's really the difference when it comes down to it.

Ok, so that's not really the whole story. In all honesty, we could have won this game. Keep in mind that we did outscore them in the first half without a single trey. So, a victory was imminent despite the poor percentage from deep if only a few other things had happened:

A. David West had pulled down more than 1 (ONE!) rebound and

B. John Salmons hadn't beat Rasual Butler off the dribble on every possession, ending the game with 29 PTs after going 13 of 18 from the field.

Seriously, Byron? You're not going to try a different defensive scheme when a mediocre 2 drops 30 points on you? Were you really that mad at Morris that he truly deserved 0 (ZERO!) minutes?

It's doubly frustrating that we lost this game considering that we could have jumped Houston in the divisional standings after they dropped a game without the services of any of their big 3.

Regardless, I'm not pressing the panic button yet. Remember that this Hornets squad dropped a game to Sacramento at the end of last season in a crucial quest to land atop the Western Conference standings. We missed that 1 seed by a single game.

It's still very early in a long season of 82 games. And though it does seem a little late to still be finding our sea legs, dropping to .500 is not devastating after only 10 games (though my buddy Curry pointed out that we haven't been at or below .500 since before last season).

We have a back-to-back against the Seattle Sloppy Seconds this weekend. If we can't close out those 2 games, then I'll cry "PANIC"... but not a second sooner.