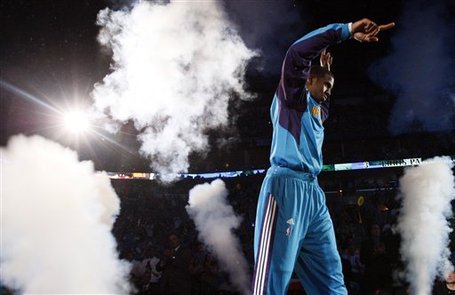 New Orleans 104 (3-0)
Cleveland 92 (1-2)
It wasn't an easy win, nor was it a very clean one, but the important thing to remember is that the Hornets walked away with a solid victory without the services of 2 of our best players. And that's nothing to sneeze at.
The night started with a fantastically overdone set of on-court introductions. Seriously, there was a brass band, dancers, and least 4 Mardis Gras Indians wandering around the court. Then George Shinn walked out on the court and gave a short thank you speech full of promises of an NBA championship.
He then turned the mike over to a gold-medal-sporting Chris Paul. Paul attempted to thank the crowd for their support, but was outdone by a vigorous "MVP!" chant. My buddy and I were going to start a pool for which game would be the first of the season in which the MVP chant would return... but I seriously doubt anybody would've have picked pregame introductions on opening night. (My guess was going to be the Lakers game on November 12.)

On to the game. Paul put up another fantasy gem: 24 points, 15 assists, 3 rebounds, 1 steal and only one turnover. Granted, his slow start in the ball handling department (he had 5 TOs against Golden State in the season opener) has his assist/turnover ratio at 4/1 (down from last's years 4.6/1), but it's only game 3.

Mr. West put up 25 points to go with 4 rebounds and 2 assists, and even Rasual dropped 14 points as a starter.
The real story for the Hornets was James Posey, who threw this line together: 15 points, 6 rebounds, 2 assists, 4 steals, and 4 of 5 from beyond the arc. Holy. Crap. We officially have a sixth man. That may sound dumb, but after sitting through last season and praying that someone off the bench would provide some kind of relief (and no, Jannero "Malibu Forrest Fire" Pargo's occasional 20 point explosions were not sufficient). To have someone off the bench who can pull this off nightly... well, all I can say is daaaammmmmn, son.
Really though, the only important stats from the evening were the percentages: the Bee shot 54% from 3 point land and 86% from the charity stripe while Cleveland only managed 41% and 58% respectively.
***
Couple of random thoughts to close:
Composed to: Massive Attack's Blue Lines