Well, chalk up another one in the loss column. The Hornets are now 3-3 against .500+ teams. You can put all the lipstick you want on this pig, but the Hornets don't look like an elite basketball team. 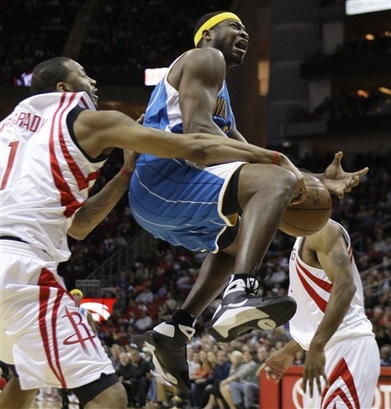 Houston has an elite defense, no doubt about it. It's them and Boston defensively as far as I'm concerned. Let's start with Chris Paul: absolutely destroyed to the tune of 2-10. I know he didn't have the jumper working. But Houston totally denied his routine floaters. One thing I'm sure everyone noticed: he often drove to the lane only to U-turn underneath the hoop and come back out. Against 28 out of 30 teams in the league, that's a converted floater. Against Houston, it's 15 seconds lost off the shot clock. The factors real quick before looking at the Rocket D versus other Hornets:

) When a team shoots 43% eFG from the floor, there's a strong likelihood that it was because of poor, unlucky shooting. That was not the case tonight. I counted maybe 5 open jumpers that did not drop (3 or so by Mr. West). Otherwise, every single shooter had a defender running at him full speed. More often, there were never even open shooters to begin with. Houston's best attribute defensively is that they do not allow clean looks at the hoop. Period.

2. OREB% ( X) One more time: what is wrong with Tyson Chandler? Does he have an injury we don't know about? Yao Ming is tall, but he isn't a spectacular rebounder by any stretch of the imagination. Chandler getting just 4 rebounds is... mind boggling. I really don't know what to say. It's becoming a recurring theme. David West and James Posey picked up the slack on the glass. But I can't even remember the last time TC did one of those patented tap outs.

3. FT/FG (X)  Other than the suffocating defense, this game was lost at the free throw stripe. The Rockets converted 5 more free throws than the Hornets attempted. A lot of this had to do with the fact that the majority of New Orleans FGA came from the perimeter. There simply weren't enough non-Paul drives to the hoop. More on this later.

4. TOr (√) 3 turns from Paul but great job from everyone else. West only had a pair, and Devin Brown had a nice night with the steals. Also: Chuck Hayes has the funniest free throw stroke in the NBA. Think Tyson Chandler with one hand tied behind his back and multiple leg spasms.

5. Pace (81) Too slow. Way too slow. I know the Hornets like to play in the 89 range. But one of the things that makes New Orleans special is this: they excel at playing at multiple paces. They proved last year that they could run with the Suns and Warriors in the 100 pace range. They proved they could handle mid-90's pace with ease. Houston is a very, slow deliberate team. I would've loved to see the Hornets push the tempo on the Rockets if only for one reason: we know they can. We know they can have great success playing a fast brand of basketball. We don't know how the Rockets would respond. The Hornets are unique in that they can play multiple styles with ease; not using that to their own advantage cost them tonight.

And now, back to Houston's defense. The Hornets' most successful play was the CCC. Yao Ming simply couldn't stop it. That's why I was surprised to see Byron remove Tyson right after 3 or 4 successful connections. That's why I was even more surprised to see the Hornets not try it a single time after Tyson came back in. I love Byron as a coach, but I definitely found that a peculiar decision.

Peja was non-existent yet again. Not that I'm too surprised- we've seen physical defenders like Bowen throw him off his game with ease. Mo was held in check too. Not a lot of off the ball movement in general, and that took its toll on Chris Paul as well.

The second unit looked pretty abysmal offensively. Their biggest problem is not having a penetrator. As NBR noted in the game thread, D. Brown looks pretty good when playing off the ball. If Byron is using him to set up plays, then he loses that aspect of his game. There's a lot of athleticism, some pretty good defense, but the offense all comes from 19, 20 foot, contested jumpers.Of course, that's never a good thing.