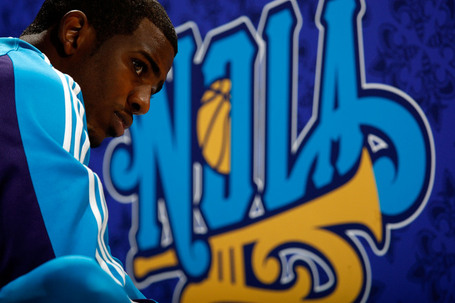 Oh, and toss 6 rebounds and 4 steals in there too. The 20-10 streak finally came to an end tonight, but at least New Orleans got to tack on one more win. With Utah, Houston, and Los Angeles all losing, it was a pretty good night to be a Hornet fan. A look at the factors:

) Take away Posey's huge contributions off the bench, and the Hornets really didn't shoot all that well. Paul went just 4-12, Peja went 1-5 from three, Tyson finished 1-5 total. Overall, the Hornets probably had far more open looks against L.A. than against Portland. Defensively, New Orleans did a great job on Brandon Roy. Devin Brown and Morris Peterson limited his ability to drive and forced him into taking tough jump shots. LMA had a nice stretch in the third, but he was held to a 7-16 night as well.

2. OREB% ( √) Not to complain too much after a win... but what's wrong with Mr. Chandler? Only 1 OREB tonight, and only 7 rebounds total. CP3, Peja, D. Brown, and Hilton all had Tyson's back though, picking up a couple OREB's apiece. Devin, in particular, was impressive on the glass. He took away a couple of boards from much taller opposition. More on Brown in the notes.

3. FT/FG (√)  We've been surprisingly good at getting to the line this year. Tonight was no exception. Chris Paul led the charge with 9 freebies (all converted) and David West and Devin Brown both got 4 from the charity stripe (also all converted). On the flip side, Portland's starters only got 8 total free throws.

4. TOr (√) Two terrific ball control teams showed their strength at taking care of the rock. Chris Paul finished with a grand total of zero turnovers to complement his nine assists while primary ball-handler Roy finished with just one. The turnover issues continued for David West (4 turns) as he had a bad pass, and an offensive foul among other things. Now 10 turns in 2 games- this whole turnover issue is oddly remniscent of last year. DX struggled with turnovers pretty much all year until some time February/March-ish. So I'm not too worried. The thing I am worried about is that stupid hesitation thing he does. Either take the shot or drive strong. He's getting stuck in between far too often.

5. Pace (78) Yuck. This game was like an obese elephant wandering in quick sand. Both these teams love to play slow, but this was just way, way, way too slow. As Dean Oliver has suggested in the past, one strategy an underdog can use to win a game is to limit the number of total possessions. So the slow pace probably favored Portland a lot more, even though New Orleans is comfortable playing slow. Look forward to another slow game tomorrow versus Houston.

Overall, I was quite impressed with both LaMarcus Aldridge and Greg Oden. I'll be quite stunned if Aldridge doesn't make an All-Star team in the next couple years at least. He has outstanding range and isn't afraid to mix it up in the paint and an traffic. I saw some Blazers fans were slightly peeved at LMA not getting respect, and understandably so. Dude's for real.

Nice to see David West play well tonight. His final line- 18 pts (7-14), 4 rebounds- doesn't seem all that impressive on its own, especially when you factor in the 4 turnovers. But I liked how Byron Scott specifically went to West every time LMA scored. It was a nice tit-for-tat sort of thing, and West consistently held up his end of the back and forth. Nice to see, after his last few subpar games.

The Devin Brown era officially began today. 2-7 isn't the greatest of starts. But Brown's length helped him do a ton of positive things defensively that Mike James simply couldn't. His pass:shot ratio was probably a bit higher than Byron would like. Then again, I'm sure Byron loved that Devin iced the game at the end with those free throws. Honestly, I'm really intrigued by a Brown-Butler-Wright-Posey-Generic Center That Probably Sucks lineup. Lots of height, lots of length, and plenty of shooting. If Boston can win with a total lack of ball-handlers in its second unit, I'm sure a Brown-led second unit could do fine.

Staying on the subject of the bench, how about Julian Wright? We finally got an opportunity to see him isolate on a couple plays. Last week, I was worried that Byron had banished Julian to the end of the bench. It seems more and more that he was simply working him back into the offense gradually. I can't wait until Wright  and Brown are firing on all cylinders to complement Posey.

The last wrinkle Byron tossed in tonight was the 4th quarter offense. For something like a 5 minute stretch, the offense ran exclusively through David West and James Posey. Paul was on the floor but literally didn't touch the ball for entire possessions at a time. James Posey as a "point forward" might be more risky against strong defensive teams. But against a team like Portland- which doesn't have any premier ball pressurers- it worked out real well.

Houston tomorrow, let's hopefully get some early separation in the Southwest Division.