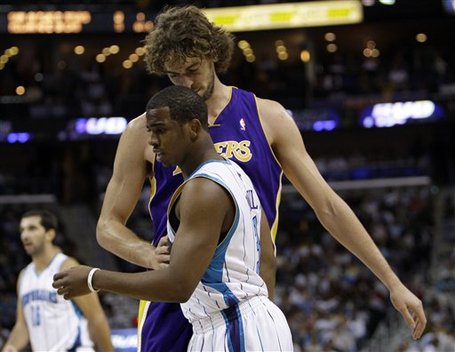 There were bad omens all night. The lighting system went snafu during the team intros, Hugo lost an antenna during one of his timeout routines, and the Hornets looked just this side of abysmal for a solid 24 minutes to open the game.

Despite an impressive late comeback in the fourth, the Lakers never once relinquished the lead. They opened with a 7-1 run, then the Hornets pulled the score closer at 10-9. The Lakers then responded by making it 15-9. And that's a pretty good encapsulation of the night. Lakers go up, Hornets cut the lead, Lakers go up again. Later, down 21, the Hornets opened the third with a 12-2. Six minutes later the Lakers were back up by 19. Second verse, same as the first.

At some point in the first quarter, I wrote, "we look good, they look better." That stance was later amended (in the second and third quarters) to "they look great, we look awful."

But in the fourth quarter, things changed. The lineup looked rejuvenated and CP looked driven. After cutting the lead from 21 to 3 in only ten minutes, the Hornets looked poised for an upset. But with 1:07 remaining on the game clock and 1 second on the shot clock, Kobe nailed the dagger shot from 26 feet away with Posey all up in his business. No way you can defend better on that series. Kobe is just... well, he's Kobe.

And that was it. You've got to hand it to the fans for sticking this one out with the team. The mass exodus midway through the fourth against Atlanta was just embarrassing. But not this time. The Hive was off the decibel chart (gauge? meter? I know nothing about science) as the fans got on their feet and gave it everything they had for the final four minutes or so.

All in all, there were some positives: CP put up huge numbers (30 points, 13 assists, 7 boards, 2 steals, and 2 turnovers), D.West put up his first double-double of the season, and we out-rebounded the most feared frontcourt in the league, and we kept finished strong against a team that has been beating its opponents by an average of 20 points per game.

But the positives had not shot of outweighing the negatives: We made ZERO shots from deep in the first half. Mo Pete had ZERO points. D.West had SIX turnovers, most of which came at very inopportune (read: momentum-killing) moments, the Hornets turned the ball over 16 times to the Lakers' 9, and we were really slow on defensive rotations, allowing an unusual amount of open shots (Gasol in particular benefitted from this).

Bottom line: we looked like title contenders in the fourth. Now we just have to carry that over for more than one quarter a game for the rest of the season.