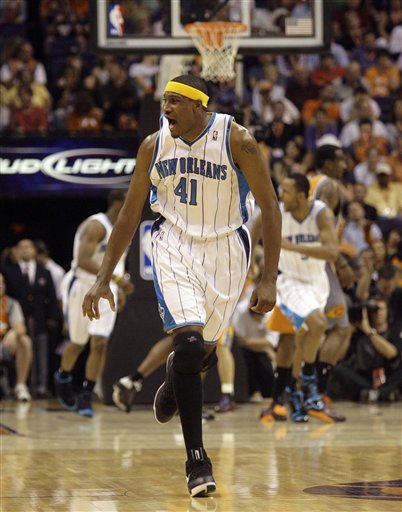 ) This was an old-fashioned shootout. New Orleans drilled 13 trifectas on just 24 looks while Phoenix did much of its damage from inside the 3 point line, where it went 30-50 (60%). Peja started the game blazing, Morris Peterson took over in the second quarter, and James Posey and Rasual Butler finished things off, making rain from deep. I love our shooting, but giving up a 59.6 eFG% is pretty unacceptable, especially after the Warriors scorched us yesterday.

2. OREB% ( √) Yeah, the stats say both teams were pretty even at offensive rebounding... but we did it without the services of Mr. Chandler. David West somewhat picked up the OREBing slack, with 3, Peja had 2, and even Chris Paul had 1. Amare had a game high 4, and finished with a game high 12 rebounds. I'm looking forward to having Tyson back for the home opener Saturday.

3. FT/FG (√)  Surprisingly good job by the Bees at getting to the line. Robin Lopez and his 3 fouls in 1:35 certainly helped, but good aggressiveness all around. Specifically, Mo-Pete made a couple of hard nosed forays to the bucket (both resulting in wild and-ones), and Chris Paul drew fouls left and right, en route to 8 free throw attempts. Even Melvin Ely shot 4 off the bench. The Hornets only committed 15 personal fouls, building on last year.

4. TOr (√√) New Orleans picked up the Daily Double on turnovers- great ball control and tons and tons of stripped balls. Chris Paul struggled to take care of the ball (5 turns), but Steve Nash was even worse (7), and while the rest of the Hornets combined for just 5 turnovers, the rest of the Suns combined for 17. Extremely active hands today, and the difference in turnover rate was the number one reason for the Hornets' victory.

All in all, this was an odd game. The normal Big 3 production was sorely lacking- Chandler of course didn't play, Paul had 5 turnovers for the first time in a while, and David West finished 7-19 from the floor. The fact that we beat a legit Western playoff by 13 on off nights by our three biggest players is impressive.

It happened, courtesy of Morris Peterson, James Posey, and Rasual Butler. Let's start with Mo- he made his initial two threes, and Byron Scott proved that if Mo is on, he won't hesistate to go to him. And maybe Byron Scott read my "Mo-Pete Conundrum" post. He isolated Peterson a couple of times, and Mo responded with flying colors. I think Mo's outburst today will be the exception rather than the rule as the season goes forward, but it's great to see him step up.

Posey: what can you say? Sure, Diaw outmuscled him, but that's the only negative thing you can say about his game. He hit a giant, Sun-momentum-killing triple, played terrific help defense, even guarded Amare well on a couple of key plays, and tossed in 2 more threes for good measure. I love this guy.

And how about Butler? Given a chance to be on the floor in crunch time (with Peja out), he drills the dagger triple from the corner. The most impressive thing is that he wasn't even that open. Butler's gained a terrific amount of confidence in his outside shot this offseason, and it's showing. A couple more games like this, and Devin Brown, stunningly enough, may be the odd man out.

I was impressed by Hilton tonight. He was given a pretty raw deal in drawing the Shaquille O'Neal assignment with no backup behind him. He missed a catch and lost a rebound out of bounds, but he also made a couple aggressive moves to the hoop, and fouled Shaq hard (which, I assume, takes some guts). He wasn't "good," per se, but it was a step in the right direction.

This team could very well have dropped these first couple games. Instead, we're 2-0 heading into the home opener. Tyson and Peja's injuries aren't serious. It looks like we may have a legitimately good second unit this year. It's hard not to be stoked about this team.