[Editor's note: First recap of the season! Junsier, Lee, and myself will be taking care of recapping duties this season. Junsier has his "Hive Drive" recap tonight, I'll pop in with a "Hive Five" tomorrow, and Lee should have his first "Hive Live" ("Hive, 325"?) on Sunday.] 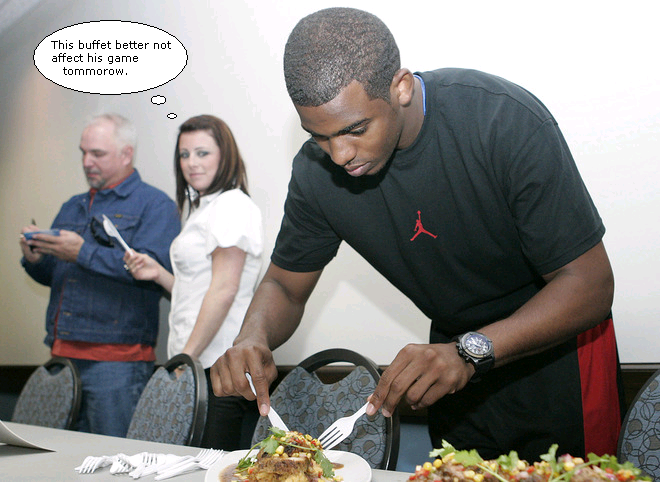 And affect it, it did. The extra food made him shoot just 3-10 in the second half, missing two crucial, open jumpers in a stretch that let the Warriors almost come back. Almost. Whatever Paul had for dessert following the meal enabled him to seal the game. Because the game was decided by the food Chris ate four days ago, not because of his actual skills as a player.

1) I was definitely not expecting the Warriors to do so well. Firstly, the team without Baron or Ellis didn't seem particularly threatening. And secondly, Al Harrington asked to be traded, like today evening before the game. And more importantly, the team's mascot's recent troubles should have had the Warriors squad in deep turmoil. So the comeback towards the end of the fourth had me on the edge of my computer chair. Rohan will surely tell you to "tip your hat to them", because they were able to give a Hornets a pretty big challenge. Kelena "Is a Wookiee" Azubuike had a few really nice drives to the hoop. One of the things I was really expecting was a Captain Jack "Chuck-Fest", seeing as he now ran the team. He did have quite a bit of fun, though, shooting 12 three pointers.

2) The Warriors' foul trouble, I think, was a major reason for the Hornets win. Magette had to sit for a bit in the 2nd, having picked up three early fouls. The clincher was Andris "Can't Ever Spell Last Name Correctly" Biedrins fouling out at the very end. Biedrins had 14 and 12, very Tyson-esque stats (Tyson had 13 and 16). I'm sure that if the Warriors had Biedrins for the last few possessions, they just may have had some second opportunities from  Biedrins'  offensive rebounding skills. On a random note, Al Harrington must feel pretty bad, asking to be traded, and then shooting 5-17 with a missed game-tying three.

3) Reading the game previews, I was really, really surprised to see D. Nelson in the starting lineup. I thought it was a glitch, or that Yahoo! Sports was now including coaches as a starter. After seeing B. Scott not being included, I clicked D. Nelson and smacked myself in the head. DeMarcus Nelson. He was taken out really early after Peja rained a couple of shots on him.

4) Chris Paul's bounce back (after his dessert) really saved the Hornets. Paul "felt he put [them] in that situation", but he did a really good job taking us out of it, too. He finished with 21 points and 11 assists. David West is an extremely underrated offensive player, he can seemingly score at will whenever we need him to. He finished with 24 points. James Posey, the key addition to the team, finished with 11 points with 3-6 shooting from downtown. Hopefully, he can contribute with double figures; bench support was definitely what hindered the Hornets most last year. Looks like Rasual Butler is finally out of Byron Scott's famed "doghouse", which imprisoned the likes of JR Smith and Kirk Snyder. He played 12 and a half minutes, with 7 points.

All in all, that was a really exciting game to watch, just too exciting for the average Hornets fan. The game was extremely close, I mean, aren't we supposed to crush the measly Warriors with our playoff-winning, basketball-machine? The Warriors played a good game today, I'll give them credit, but the food Chris ate on October 26th definitely affected our game. For certain, the Bees will pick up the pace and definitely will look better than today.