Share All sharing options for: The Morris Peterson Conundrum

New Orleans brought in the 29 year old Mo-Pete last offseason to provide some insurance for Peja and to provide an additional scoring threat to space the floor. While he excelled at knocking down the trifecta (career high 39.5%), many (including myself) felt that Byron Scott did not involve him in the offense well enough.

If you had asked me for a hasty diagnosis of the problem in June, I would have mentioned that the offense called for Mo to take too many threes. Any Hornets fan could have told last year that Peterson not only attempted a ton of triples, but also took his shots late in the shot clock. But how related was this ramped up three point shooting to Peterson's career low PER? Did Peterson- always a high volume three point shooter- finally reach his breaking point?

Anecdotally speaking, Mo-Pete posted the second highest 3PA/36min of his career, along with the lowest PER of his career. Is there a statistically significant relationship hiding behind the anecdote? 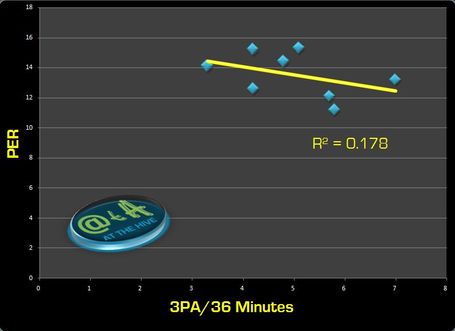 No. There really isn't. This came as something of a surprise to me- the two outliers of 3PA correspond to two of Peterson's worst PER years. But Peterson hasn't performed terribly across the board in high volume 3PA years. There is something of a relationship, but it's pretty tiny. In order to be even 90% sure of a statistically significant relationship, we'd need a correlation coefficient of .549, a far cry from the .421 produced by the chart above.

So if it isn't the increased 3PA/36 that's the main problem, then what is? My next step was to think in terms of overall shot attempts. Force a player to become more perimeter oriented, and logically, drives to the hoop must decrease (assuming a similar net FGA).

One of the best ways to measure the effectiveness of a player's driving ability is through FTA/36 and what's known as DrawF% (fouls drawn per possession). A quick glance at Peterson's career in both those stats indicates that last year was a down year for him in terms of drawing fouls.

Some players require a high DrawF% or FTA/36 to be effective. Others can afford fluctuation and remain at similar playing levels, simply due to the way they play the game. How related are Mo-Pete's FTA/36 and DrawF percentages to his overall performance? 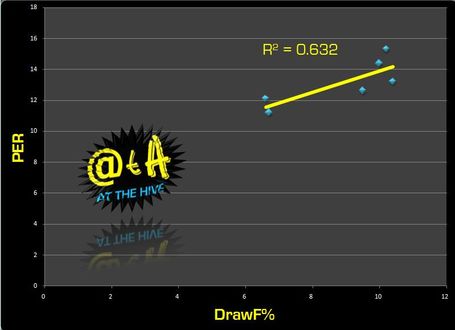 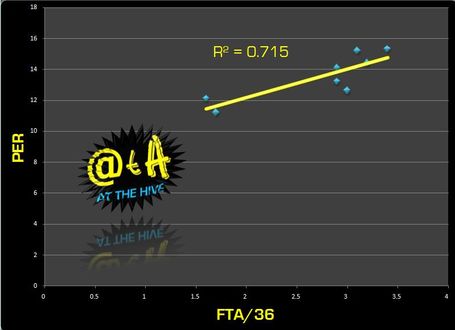 Answer: very. Starting off with DrawF%, we have a correlation coefficient of .795. Consulting a critical value table, we find that we need only have a .729 coefficient to have be 90% sure of a statistically significant relationship.

The FTA/36 coefficient is .845. The critical value table tells us we can be greater than 99% certain of a significant relationship. When you consider that most academic publications treat 95% as their benchmark, it's pretty clear we are on to something here.

Okay. So now we've descended into this deep, dark hole of statistics. Time to climb back out into the real world. What does a 99% certainty that FTA/36 influences  PER mean in real life? What do these graphs mean in terms of the hardwood, the sneaker squeaks, the floor burns, that powder LeBron throws in the air...?

Basically that Mo-Pete needs to play a more physical game. That Byron Scott needs to put him in a position to draw defenders out of position and thus draw contact.The problem isn't that Mo-Pete takes too many threes. His three point shooting belies the fact that Mo-Pete's role in the offense is not naturally conducive to physical basketball. And while Peterson is by no means a "physical" player, every player needs to be at a certain threshold of foul drawing. Remember, one of the best ways a player can erase offensive deficiencies (shooting, turnovers) is through taking advantage of his defender's deficiencies. The New Orleans offense affords Mo-Pete little to no chance to do this, and thus every missed shot or turnover is magnified.

The Hornets' biggest strength offensively is Chris Paul's ability to effortlessly find open player after open player. In a sense, these players essentially become extensions of Paul himself. He's not the one physically putting the ball in the hoop, but he might as well be. Those players afforded isolation opportunities- David West and Peja Stojakovic, for example- can manage to salvage their own individual offensive identities even as Chris Paul runs the show. Those not given those isolation chances remain relegated to extensions of Chris Paul. For some (Hilton Armstrong and Tyson Chandler come to mind), this is a good thing. For some like Morris Peterson- right on the edge of having enough offensive ability to pull off iso-plays and not having enough- this is not. And therein lies the crux of the Morris Peterson Conundrum.