Share All sharing options for: The 30 Greatest Hornets of All-Time - #28 Kelly Tripucka

Welcome to #28 of the 30 Greatest Hornets of All-Time. It is part of an ongoing series in the summer of '08 to commemorate the 20th anniversary of the Hornet franchise. Today's contribution by atthehive. Today's references: The Los Angeles Times (quotes), The Desert News (quotes). Enjoy!

Which player scored the first points in franchise history? If you answered Kelly Tripucka, have a cookie. If you didn't, here's your chance to learn some more about the 28th greatest Hornet of all time.

Tripucka joined Charlotte in its inaugural season, far and away the team's most accomplished player. He enjoyed success at virtually every level of his career- the "New Jersey High School Basketball Player of the Century," a four year starter with Notre Dame, four tourney appearances, and the team lead in scoring all four years- before coming to Charlotte in 1988. But his NBA career didn't go nearly as smoothly as his pre-professional one. 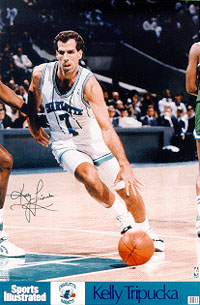 Drafted in 1981 with the twelfth overall pick by Detroit, Tripucka laid the foundation for a new Pistons era along with Isiah Thomas. But despite averaging 21.6 ppg his rookie year and 26.5 as a sophomore, Detroit decided to unload him in 1986. The year before he arrived, the team won 21 games; the year he left, they won 46 and would win the NBA Finals a mere two years later. Tripucka didn't get the chance to be a part of that, traded for fellow Fighting Irishman Adrian Dantley. Thus began a forgettable chapter of his pro career.

He arrived for the '86-'87 campaign in Salt Lake City, where another 70's doormat team was starting to come into its own- the Utah Jazz. 1986 was the third year of Stockton/Malone, and Coach Frank Layden- recently Coach of the Year- wasn't going to mess with that. Tripucka's minutes were slashed heavily, and his scoring average plummeted. "I was the last one to find out," Tripucka said of the trade. "I'd just finished playing in a charity golf tournament and I was in the locker room and some guys next to me were talking about the trade because they'd heard it on TV. I still don't know why they traded me. Detroit was the perfect place for me. I didn't expect to get traded. It was a nightmare situation."

Tripucka attempted to stay professional through the difficulties, mentioning "I've tried to be as diplomatic as possible. I don't want to burn any bridges." Had he wanted to, he certainly would have had a case. During the 1988 playoffs, he was benched in favor of a 5th round draft pick- Bart Kofoed- who had paid his way into training camp the year before. Coach Layden was slowly becoming a villified man in Salt Lake, engaging in such antics as publically ridiculing his own player for weight issues, and it culminated in a change at head coach. In 1989, Jerry Sloan became H.C., but it was too late. Tripucka had already lost two of the prime years of his career.

"You hope it's not happening, but this is reality. I wouldn't want anyone to go through it. I feel more embarrassed than anything else. You never adjust to it. I couldn't have written this script two years ago.

"This has been the most difficult two years of my life."

Then, in 1988, his luck finally changed. The Hornets joined the NBA that year. Utah left Tripucka unprotected in the expansion draft, and Charlotte, going for recognizable names, snatched him up. Nobody really expected much of the Hornets, who were drubbed 133-93 in the franchise opener. They finished 20-62 after losing 6 of their first 7. There were losing streaks of 9 and 10 games. And yet, the Hornets managed to be one of the NBA's biggest attractions. Charlotte Coliseum- the Hive- was always rocking no matter the score, and the Alexander Julian designed uniforms were considered among the snappiest in the league. ''A Hornets game is where it's at,'' explained a delighted Tripucka. ''If you're not there, or you haven't been to a game, or you don't talk about it, you'd better move out of town.''

He was having fun once more. Tripucka's game recovered, and he put in three solid campaigns with the Hornets. He got along with Hornets' coach Dick Harter, and for the first time since Detroit, he had some stability. There's the oft-told story about how he cried on court after being benched and booed mercilessly by Hornet fans. But I can't find it in myself to blame the guy after what he went through in Utah. Yes, his game dropped off a little bit. He had lost a step or two on defense. But he had been to basketball purgatory and back, a journey few are tested with.

That first points in Hornet history question is a great piece of trivia. For Kelly Tripucka, it was much more than that. It was a matter of personal redemption.